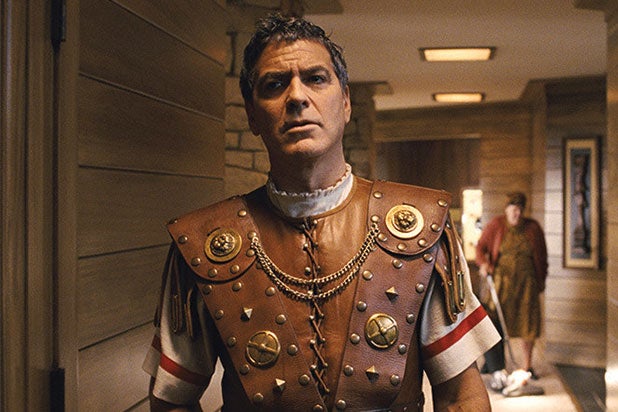 In 2004, Joel and Ethan Coen first came up with the idea for a movie that would skewer the Golden Age of Hollywood. Twelve years, eight films, and one Best Picture Oscar later, the brothers have finally released “Hail, Caesar!” to solid reviews from critics.

The 17th film directed by the Coens currently has a 76 percent approval rating on Rotten Tomatoes. Critics have called the film “a sly satire” and “tartly on-point.”

The Wrap’s Alonso Duralde praised it as “a bright and goofy valentine to a bygone age of moviemaking.” The Coens gathered a heavyweight cast for the comedy, including George Clooney, Ralph Fiennes, Josh Brolin, Tilda Swinton, Channing Tatum, and Scarlet Johannson. But Duralde’s highest praise went to Aiden Ehrenreich as cowboy star Hobie Doyle. He said his “aw-shucks demeanor in the face of studio duplicity (and hedonism) is consistently hilarious.”

“It’s no easy feat being the standout here,” Duralde wrote. “The marquee names are all delightfully funny, not to mention the passel of character actors playing the blacklisted writers…but Ehrenreich’s going to have moviegoers learning how to spell his name.”

“Hail, Caesar” opens Friday. Read some of the positive reviews — and negative dissent:

The “trainwreck” collision of ideas in it — from Enlightenment philosopher Georg Hegel’s master-slave dialectic to chronicles of the drinking, whoring and juvenile behaviour of movie stars — is what kept me enthralled and thus never bored. Even when the plot goes off the rails.”

“This is why I am giving the film a good review despite warning most people to see it at their peril. Just for sheer audacity, ‘Hail, Caesar!’ demands a five-star rating. For Joel and Ethan Coen‘s screenplay and loosey-goosey direction and jumbled film editing, I would assign a one-star rating. That is how I ended up somewhere in the middle with three-and-a-half stars.”

“For Coen fans and movie-trivia mavens, “Hail, Caesar!” is a bracing injection straight into their pleasure centers, brimming with the brothers’ signature brio, offhand erudition and more inside jokes, as the saying once went, than there are stars in heaven. Slick, silly and often extravagantly pretty, it’s a pastiche that threads a tricky needle, conveying the dual nature of cinema as an enchanting art form and a ruthless, rationalized industrial practice.”

“It’s possible to enjoy ‘Hail, Caesar!’ simply for the fast jokes and referential musical numbers. Channing Tatum‘s Gene Kelly-eqsue athletic tap dance is a standout, marred just a bit by Tatum’s self-conscious smirk. (Kelly would have simply grinned.) During Johansson’s water ballet, the old man next to me blurted, “Esther Williams!” and then promptly fell asleep. That the Coens already referenced Busby Berkeley in ‘The Big Lebowski’ risks younger fans thinking they’re merely paying homage to themselves — which, on some level, maybe they are.”

“‘Hail, Caesar!’ is the only movie anyone will ever make that features both Marcuse and Saul of Tarsus as characters, along with a scene that perfectly captures the look and feeling of late Stalinist Soviet propaganda films. Apparently Dolph Lundgren plays a submarine captain, though I’m not going to tell you where he comes in or how, and I didn’t know that until I read through the credits. Dolph Lundgren, uncredited, at the helm of the Red October. This movie is exactly that great.”

“The Coens’ ‘Hail, Caesar!’ is a flimsy construction that depends on a zany spirit and the charm of individual scenes to hold it together. There are times when this begins to feel like a dubious strategy, but each time, the movie rights itself. And if you keep your eyes open, there is always something to notice: Frances McDormand in a subtle tribute to MGM’s longtime editor, Margaret Booth, or a boardroom adorned with nothing but framed photos of Wallace Beery. In the biblical epic, you might also note the palm trees of a type that doesn’t grow in the Middle East.”

“Don’t let the star-studded cast fool you. Aside from Brolin, none are consistent threads in the Coens’ tapestry, never really tying this movie together. Clooney’s vain Communist Party dupe is a comedic dead-end, as are Fiennes’ diction jokes with Ehrenreich. What you see of Jonah Hill in trailers is pretty much what you get.”