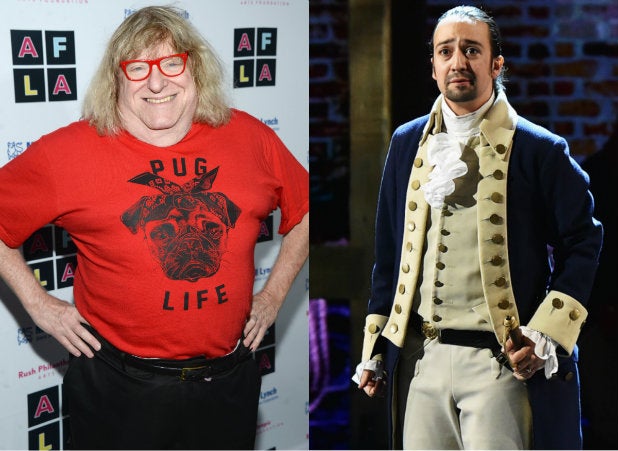 The stage and screen writer recently visited “Hamilton” creator Lin-Manuel Miranda when the newly-minted Hollywood darling was performing the show’s title role. Vilanch wasn’t shy in pitching himself for the part of the villainous King George — a role previously held by actor Jonathan Groff.

“I went back and saw Lin-Manuel and I said, ‘I want to play the King. One costume, three songs that are all the same and no stairs to climb? I’m in,'” Vilanch said during an appearance on RuPaul’s podcast “What’s The Tee?”, uploaded on Thursday.

Indeed the historical figures of “Hamilton” like the eponymous Alexander, George Washington, Thomas Jefferson, James Madison and Eliza Schuyler are all played by attractive young people, a move that has seen nothing but praise for casting people of color to portray the white founding fathers and their cohorts.

Vilanch isn’t unthinkable casting for the king — a character beloved by deities as high as Beyonce. He played Edna Turnblad in the original Broadway production and subsequent national tour of “Hairspray” in 2002. He’s also worked on several original musicals and re-mounts in independent theater.

Not that he liked much else aside from the convenience of the role. Vilanch told RuPaul and his co-host Michelle Visage he didn’t care for “Hamilton” — which swept the Tony awards and remains an un-gettable ticket.

“If your idea of the founding fathers is the Wu Tang Clan … and if you like lyrics like, ‘John Adams shat the bed,’ then that’s the show for you. But I’m still looking for a melody,” Vilanch concluded. “I was underwhelmed by it.”

It’s unclear if Vilanch will return to the Academy Awards telecast this year as either a writer for the production or the host  (Vilanch has had turns doing both). The telecast — this year produced by Mike De Luca and Jennifer Todd and hosted by Jimmy Kimmel — has yet to announce its staff.

Representatives for Miranda were not immediately reachable for comment.