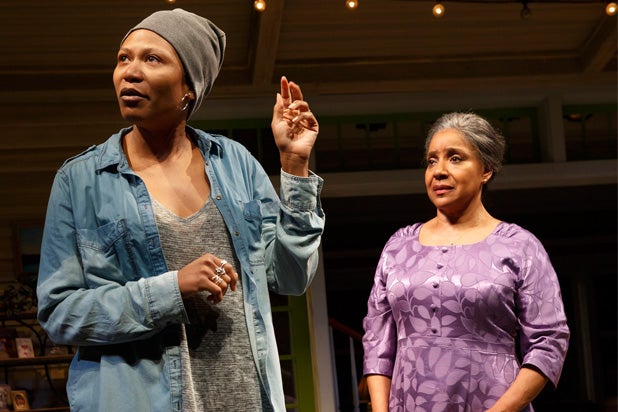 Tarell Alvin McCraney knows how to whip up a big dramatic scene and make it play on stage. He accomplishes it whether he’s writing for many actors, two actors, or just one. In his new play “Head of Passes,” which opens Monday at the Public Theater and stars Phylicia Rashad, there are many such moments of high drama that grab and hold the attention.

But first, a geography lesson: The Head of Passes is the mouth of the Mississippi River, and it’s on that very unstable and disappearing land in Louisiana that Shelah (Rashad) has raised her family, which is now giving her a surprise birthday party. Not only does Shelah’s house leak during a torrential rainstorm, the place is falling apart. Literally.

Before the birthday cake arrives late in the first act, Shelah coughs a lot, because she’s dying, which never gets in the way of her talking and talking. Conversations always lead back to her very absent daughter Cookie (Alana Arenas), who is clearly estranged from the rest of family, most specifically Shelah.

There’s so much fraught, eye-rolling talk about Cookie that the stage is set for an epic battle when she finally does show up. McCraney delivers a blistering, ultimately heartbreaking face-off. Cookie doesn’t want to stay for the party, despite Shelah’s pleas, and McCraney writes that push-pull between these two women with precision and insight. Also, Rashad and Arenas are simply brilliant. Rashad can be very grand on stage and McCraney has written Shelah to be very grand. Rashad, however, puts that grandeur aside for her character’s moments with Cookie to reveal a deeply caring, contrite woman.

Cookie is clearly a mess. When Shelah’s friend Mae (Arnetia Walker) makes an unexpected visit from the kitchen, sees Cookie talking to Shelah, and retreats back to the kitchen without saying a word, nothing could sum up more effectively the utter shambles of this woman’s life.

Arenas, a longtime member of the Steppenwolf Theatre Company, makes her New York stage debut with “Head of Passes,” and gives a mesmerizing performance. From the very beginning of the play, McCraney prepares us for a big moment with Cookie; his writing, Rashad, and Arenas fully deliver on that promise.

Too often, however, McCraney is less effective at preparing us for these big confrontations. Two other Act 1 skirmishes — one dramatic, the other comic — come off as overblown. In a moment of levity, Shelah’s white doctor (Robert Joy) makes an off-the-cuff remark about black people not omes out of nowhere, and his words are hilarious in their awkwardness. However, his statement shows an insensitivity that’s unsupported by everything we know (and come to know) about the character.

A bigger misstep is the fight that occurs between two servants (John Earl Jelks, Kyle Beltran), a father and son, that presages the more crucial showdown between Shelah and Cookie. The father-son fight is flashy, but also disrupting (and not in a good way), coming as it does so early in the play between two supporting characters.

Most critical, McCraney doesn’t lay the groundwork for the big tour-de-force that is the second act. Here, God is in an Old Testament frame of mind in all the Job-like abuse He levels upon poor Shelah and her family. He’s a capricious, sadistic deity as written by McCraney.

Unfortunately, this playwright’s flair for comedy deserts him in the plague of death that visits the crumbling house of Shelah. This isn’t tragedy. This is creaky melodrama of the David Belasco variety, and Tina Landau’s direction and G.W. Mercier’s scenic design push it into that unfortunate arena. What’s needed here is something much more figurative, if not downright surreal. Exposed also is the other side of Rashad’s innate grandeur when she confronts God. Shelah turns rather pompous at the end.