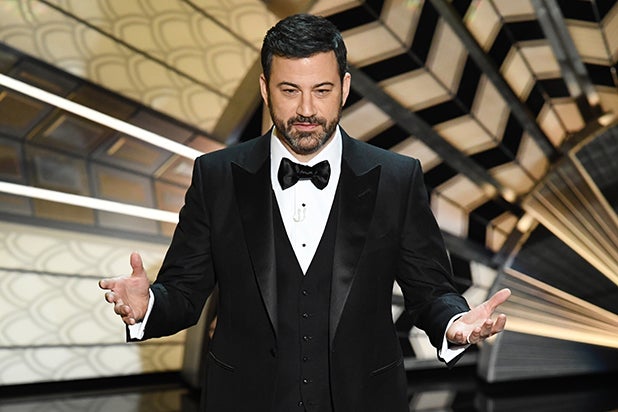 ABC late-night host Jimmy Kimmel couldn’t make the network’s upfront presentation on Tuesday because he was too busy taking care of his newborn son.

Kimmel traditionally opens the presentation with a monologue roasting the network, ad buyers and pretty much everyone else. But after revealing that his son Billy had to undergo emergency heart surgery in a tearful monologue on his show earlier this month, Kimmel skipped Tuesday’s presentation to be with his family.

Instead, Kimmel sent a letter to attendees that was read on stage by Disney|ABC Television Group President Ben Sherwood, who was introduced by “Black-ish” star Anthony Anderson as “the man who signs my checks and the whitest person in America.”

“Of course the elephant in the room and — come on, admit it — one of the only reasons you come here, is the annual masochistic tradition of Jimmy Kimmel insults,” Sherwood said before reading the letter. “We were really looking forward to it this year, but Jimmy is where he should be, taking care of his family.”

Read the message Kimmel sent, as read by Sherwood, below:

Dear friends,
As many of you know, I’m boycotting the ABC upfront this year to protest the cancellation of “Dr. Ken.” I’m very sorry I can’t be there with you this year. And if you believe that, you’re just the kind of ad buyer we’re looking for. On behalf of my family, thank you for the good wishes. My son Billy is doing really well, and I promise to be there next year with you on the off chance broadcast television continues to exist.