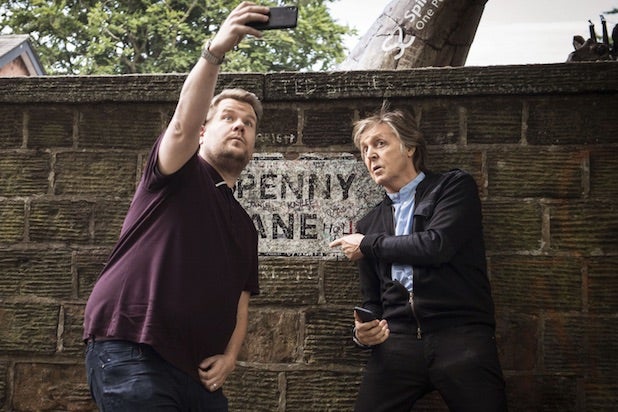 An edited version of this story about James Corden and Ben Winston first appeared in the Down to the Wire issue of TheWrap’s Emmy magazine.

The most-nominated person at this year’s Emmys is writer, producer and director Ben Winston, with eight separate nominations. The second-most nominated is James Corden, with seven.

What does this teach us?

Well, since Winston happens to produce, write and direct James Corden’s shows, it teaches us that it’s good to be in proximity to Corden (or to be Corden).

(Winston was also nominated for producing the Grammy Awards, and Corden for hosting “The World’s Best.”)

So with five different shows based around a single talent all landing nominations for Team Corden, does that mean a TV show need to exist in a variety of different formats and incarnations to connect these days?

“That’s an interesting question,” Winston said. “We make a show on network TV, but in this day and age, we are very aware that the generation that is growing up doesn’t ask what time a show is on. We grew up with, ‘I love that show at 8 o’clock,’ but we make a show at 12:30 at night, and we’ve never ever considered that.

“We launch a show at 12:30, and then we create a world that you can be part of. It is crucial to engage the interactive and digital communities. That’s what allows network television to survive and flourish in the modern world.”

Of all the shows in the Corden Cinematic Universe, the “Carpool Karaoke” one hour special with Paul McCartney landed the most nominations, five. Winston, who directed the special, said this year’s version of the “Carpool Karaoke” franchise is not only supersized (one hour in Liverpool with McCartney as the sole guest) but different in approach.

“‘Carpool’ usually manages to get really wonderful interviews, and with Paul, you had someone that James and I have looked up to our whole lives,” he said. “When we were preparing, there were so many stories that we wanted to talk about that we realized that it would be much less about the comedy than usual. We realized it would be an opportunity to have a conversation with a real icon, and the fact that he agreed to do it in Liverpool gave it a whole other dimension.

Also Read: 'Crosswalk the Musical' Does 'Les Misérables,' and James Corden Makes an Ass Out of Himself in Paris (Video)

In the end they did create a 20-minute version that drew huge traffic on YouTube, but also the extended version that became a special of its own. “I feel like the one-hour film really takes you on a journey of his career,” Winston said. “It’s very rare that you can take an icon back 40 or 50 years and be able to reminisce about those days.”