Two trends were ongoing in entertainment this year, and neither of them augur particularly well for Hollywood in 2016.

The defining trend has been the destabilization of the cable industry as streaming giants Netflix and Amazon offer compelling alternatives to consumers’ monthly cable bills. The stomach-twisting moment was learning that ESPN — Disney’s golden boy — had lost 7 million subscribers in the past two years.

Where are viewers going? To standalone services.

Netflix just keeps getting better at making entertainment, with the buzzy docu-series “The Making of a Murderer” dominating everybody’s holiday viewing this week. (Confession: I have awards screeners that I am ignoring as homework to binge-watch this compelling miscarriage-of-justice tale by Laura Ricciardi.)

Amazon is investing hundreds of millions of dollars to build a library of original content, and has the deepest pockets imaginable to continue that strategy.

Traditional TV networks like HBO, Showtime and CBS are scrambling to keep up by launching streaming platforms, but many of them may be late to the game. And so Wall Street is continuing to punish Hollywood for not getting ahead of this shift.

Disney CEO Bob Iger must be horribly frustrated to see his company’s stock continue to trend steadily downward since late November, despite the historic success of “Star Wars.” 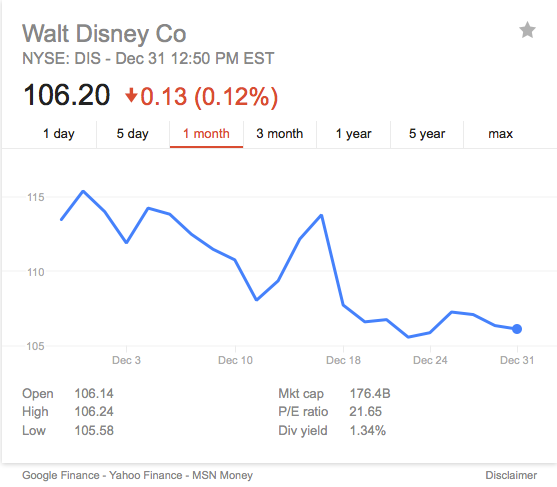 Iger made a brilliant deal buying Lucasfilm, and his team executed a brilliant rollout of “Star Wars: The Force Awakens.” But still Wall Street seems to say that making beloved stories that drive audiences to theaters does not matter enough in the larger picture.

Which brings me to the second trend. We’ve reported that movie theaters experienced a resurgence this year. From the standpoint of numbers, this may strictly be true: The domestic box office is set to hit a record $11 billion, and attendance is back up after four years of downward movement.

But Hollywood, let’s not kid ourselves. None of us really believe that this is anything but a happy hiccup thanks to “Star Wars,” “Jurassic World” and the normal ebb and flow of business.

Make no mistake, exhibition is in serious trouble. The only thing truly rising at the box office is the average age of moviegoers. I’ve never seen so many seniors out and about than at the multiplex on a Saturday night. Other than “Star Wars,” I cannot think of when my teenage and early-20s kids made a plan to go the movies.

Domestic box office is still less than two-thirds of the global business, so that is some relief to Hollywood movie studios if not American exhibitors. But the long term trends are not encouraging. Movie-going is meant to be mass entertainment, but the masses are moving elsewhere.

I am not trying to be a doom-sayer, but I have been beating this drum for some time. The only solution is going to be smart alliances between traditional entertainment companies and the tech giants that have cast a wanton eye at the content industry: Facebook, Amazon, Snapchat (yes, like it or not) and Apple.

Recently, I heard that HBO chief Richard Plepler was out in Silicon Valley, having a private dinner to meet the local power players. That’s a smart move — few can rival Plepler at a charm offensive.

And for a few years now, Ted Sarandos at Netflix has organized a retreat in Montana for a diverse cross-section of the high and mighty, from producer Brian Grazer to Facebook COO Sheryl Sandberg. They eat, they drink, they hike, they yoga — they bond.

It’s not a zero-sum game, but Hollywood needs to make a more active effort to court digitally minded partners. My idea? Media companies should resolve to spend more time wooing counterparts up in the Valley in 2016. (Silicon, not San Fernando.) If we work together, the declining and rising trends can dovetail and result in winning strategies for media companies both old and new.