This story about Thomas Newman is part of the “1917” cover package in the Oscar Nominations Preview issue of TheWrap’s Oscar magazine.

Film composer Thomas Newman has worked with Sam Mendes since the director’s first film, 1999’s “American Beauty.” But he’s never done a film quite like “1917,” where the 14-time Oscar nominee found that his music had to reflect the film’s conceit that it’s all one long, uninterrupted shot.

“I knew going in that this was going to be a first time for everyone, because of this present-tense thing,” he said. “I had to constantly be thinking about what worked and what didn’t — and why it worked when it did, and why it didn’t work when it didn’t.” His conclusion: “Any time I tried to write music that commented on what was happening, it didn’t make the movie as exciting. I had to stay in the present tense and not try to outsell or outmaneuver what you were seeing on screen.”

Mendes, he added, also gave him a basic rule: “He didn’t want gloom on gloom. Essentially, if these guys are trudging through mud with their guns pointed, how do you get to different kinds of psychological landscapes?”

Newman first discussed the project with Mendes in the fall of 2018, and he began getting footage from the shoot in early May of 2019. By that point, he’d already been toying with ideas and trying to figure out what he called “the allowable vocabulary” for his music. As editor Lee Smith was assembling the film during production, Newman gave him musical options. 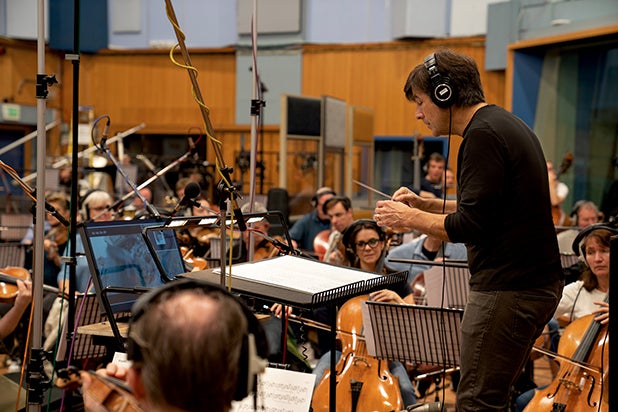 The most challenging sequence, he added, came early in the film, when Blake and Schofield make their way through crowded trenches as they begin their dangerous mission to deliver a message through German-controlled territory.

“The scene is involved in story, but there’s also a requirement in terms of pace and tension,” he said. “How much can the music stand apart from the dialogue, and how can I tease the nature of their tension? And the blocking is always changing as they walk through the trenches, so the music has to ebb and flow in ways that don’t call attention to themselves.”

The music is tense but also understated for much of the opening hour of the film; it isn’t until a nightmarish sequence in a bombed-out French town lit by fire and flares that it becomes bigger and more expressionistic.

And read more from the Oscar Nominations Preview issue here.