What a day to be Bob Iger.

You’re named to Obama’s Export Council, Disney’s stock rises 4.5% in a market rally, you’re hanging in Sun Valley with your fellow masters of the media universe and suddenly …

… a jury goes and spoils it all by awarding $269.2 million of Disney treasure to Celador International, the British creator of “Who Wants To Be a Millionaire.” 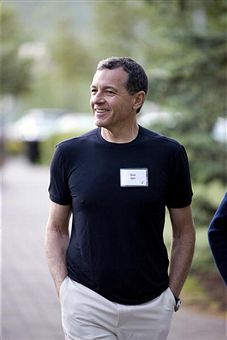 The reason: there was something those nine men and women didn’t like about the shell games going on down in accounting. That was the basis for a rare and stunning win by a Hollywood underdog — and one that could tip the scales of showbiz contract justice.

Self-dealing – or vertical integration as it’s also known — was at the heart of Celador’s case against the Disney TV family of companies. Celador first sued in 2004, claiming that Disney, ABC, Buena Vista and Valleycrest Productions constructed a series of slippery deals and secret arrangements that hid hundreds of millions in revenues.

That was certainly the case with Celador vs. Disney, which has vowed to appeal.

“Disney is an absolute giant and we are a tiny little minnow,” Celador CEO Paul Smith said Wednesday, hours after the verdict was read. “I don't think they believed a small independent producer would go after them and indeed be so determined.”

The result will be expensive for Disney. Considering that the case has been in the courts since 2004, ending with the nearly five-week trial in Riverside, it already has been. And it has to be just a little embarrassing for Iger & co., too, since the CEO coolly took the stand to defend Disney’s honor.

“Thanks to ‘Toy Story,’ Disney has done great this summer,” a NYC-based market analyst said to TheWrap, “but the kind of money the jury awarded Celador today isn’t something you can hide on the books.”

Celador certainly got the low end of what it sought — $279 to $395 million was the range – and slogged through six years of wrangling, dozens of witnesses over four weeks of testimony and three days of deliberations to get it.

One MVP candidate had to be former Disney CEO Michael Eisner. Though he was on the witness list for weeks, he was absent when his day came, away in Italy on business. So the judge allowed Celador lawyers to read Eisner’s over-the-moon emails about bringing “Millionaire” to ABC, and how rich it would make them all.

At one point he wrote to his top men: ““We own it and it costs almost nothing … sometimes the entertainment business is just wonderful.”

You wouldn’t have read that sentence had Eisner kept his date with the court.

In fact, there’s a certain populist tinge that colors this win for Celador, which never drew a smoking gun. It was more subtle and technical than that; a case shaded with themes of fairness and forthrightness.

After the verdict was delivered and the courtroom mostly cleared, one member of the jury remarked that Disney’s doings “just didn’t feel ‘right.’”

Does anything ever feel right about a Hollywood profit-share deal?