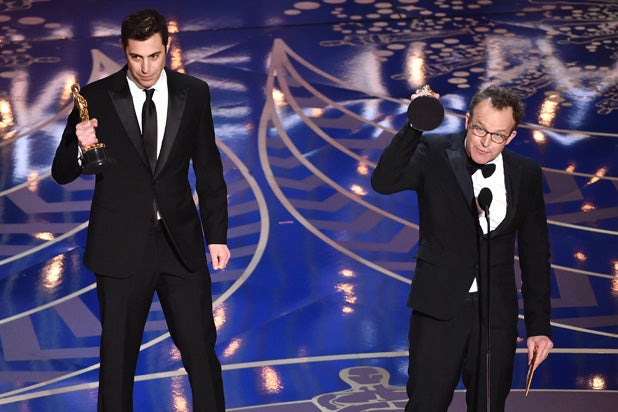 It won the first award of the night and it won the last one — and because of that, it didn’t matter that “Spotlight” was completely shut out for the rest of the 88th Academy Awards.

Tom McCarthy’s drama about clergy sexual abuse and the reporters who uncovered it is now the first Best Picture winner since “The Greatest Show on Earth” to only win a total of two Oscars. It also became a rarity in these days of saturation coverage of awards season: a film that started the season as the favorite and ended it as the winner.

Bigger, bolder and flashier contenders stole the film’s thunder along the long road from its Venice Film Festival debut to the Dolby Theatre stage, but “Spotlight” outlasted them all, proving to be the kind of consensus favorite that doesn’t need a lot of other awards to win the big one.

Going into the last two weeks of the season, though, the film appeared to be the least likely of the three top nominees. “The Big Short” had won the Producers Guild Award, which had been the most reliable Oscar precursor since both bodies expanded from five to 10 nominees and introduced the preferential system of counting votes.

“The Revenant” director Alejandro G. Inarritu won the Directors Guild of America Award, which was historically the most reliable Oscar indicator.

And “Spotlight” had to settle for a Writers Guild Award and for the Screen Actors Guild’s ensemble award — a good prize to have, since the Actors Branch is by far the largest in the Academy, but the least reliable of the major guilds in predicting Oscar success.

For a while in recent weeks, “The Revenant” was the film with momentum: It won the DGA and then it won again at BAFTA, buoyed by the fact that that the grueling big-budget movie, which had seemed to be commercial folly when its budget soared toward $150 million, was actually making money, topping $400 million worldwide.

But “The Revenant” was also the most divisive of the major nominees, seemingly with a far larger love-it-or-hate-it constituency than “Spotlight” or “The Big Short.” That worked against it in the Academy’s preferential system of counting ballots, in which a film must be a true consensus favorite to win.

In addition, in recent years in which the Academy voters have been given the choice between a big, bold, commercially successful “movie movie” and a smaller, tougher issue-oriented film, they’ve gone small: “The Hurt Locker” over “Avatar,” “12 Years a Slave” over “Gravity.”

As the Oscars approached, dismissals of “The Revenant” picked up steam, as some voters clearly got turned off by a campaign that relentlessly focused on how hard the movie had been to make. At the same time, “Spotlight” switched the focus of its own campaign.

Where it initially played up the Boston Globe reporters who’d uncovered the scandal in the Catholic Church and who’d been the subjects of the film, it began to emphasize the victims of clergy sexual abuse, showing how the film had helped bring the issue into the light and was aiding in the healing process. “One Film Is Making a Difference,” read the ads.

And that was enough to keep “Spotlight” in the voters’ minds, even after “The Revenant” had gotten the headlines and “The Big Short” had become a surprise entrant in the race after it was unveiled in November and released in December.

“The Big Short” also tried to play the importance card with its own ads late in the game, but “Spotlight” had seized that advantage early. And while six months is a long time to be a favorite in a race as tightly contested and feverish as this one, the film was always one that was easy to vote for.

It proved that on Saturday at the Film Independent Spirit Awards, at which it was heavily favored. And it proved it again on Sunday — not winning a lot of Oscars, but definitely winning enough.

Apart from the close Best Picture race and the focus on diversity, this was an Oscar show that was entirely predictable for the first hour, with “Spotlight” and “The Big Short” winning for screenwriting, Alicia Vikander for Supporting Actress and “Mad Max: Fury Road” in a string of below-the-line categories.

But the Best Visual Effects victory for “Ex Machina” over three Best Picture nominees and “Star Wars: The Force Awakens” made it the first time since 1971 that a best-pic nominee had lost to a non-nominee for visual effects, and gave the award to a film with a budget about a tenth of most of the other nominees.

And it suggested that the Oscars might have a few surprises left – which they did when “Bridge of Spies” actor Mark Rylance, who’s been working in the theater and did virtually nothing that could be considered awards campaigning, beat prohibitive favorite Sylvester Stallone for Best Supporting Actor.

And there was one more shocker left, when the James Bond song “Writing’s on the Wall” won the Best Original Song award only minutes after Lady Gaga brought the house down with a passionate performance of the song favored to win, “Til It Happens to You.”

But those three jaw-dropping moments are more than usual for an Oscars show – and if Rylance’s win is likely to be seen as showing a surprising lack of sentimentality, the song winner may well go down as one of the worst decisions ever in the always-controversial music categories.

In fact, coupled with the producers’ decision not to perform two of the five nominated songs, eliminating gifted performers to stick with famous people, it would have been an extraordinarily bad night for music at the Oscars, were it not for Ennio Morricone’s long-overdue win for original score, and Gaga’s passionate and showstopping performance.

After all the music fuss, the show went back to predictability with the final two acting awards, with Brie Larson and Leonardo DiCaprio taking the prizes they’d been expected to take for their performances in “Room” and “The Revenant,” respectively.

And then, once again, it was time for “Spotlight.” Slow and steady, in this case, won the race.