The journey of getting the unabashedly romantic, Black love-forward feature “Sylvie’s Love” in front of our eyeballs (and what a feast it is for those) certainly has a happy ending. But it took some time to get there. The period drama — centered on Sylvie (Tessa Thompson), a tenacious record-store clerk angling for a big break working in television, and Robert (Nnamdi Asomugha), a soft-spoken saxophone player whom Sylvie embarks on a love affair with — premiered at the 2020 Sundance Film Festival to oohs and aahs that primed the pump for an impending cinema blitz. Then a global pandemic happened, and a Plan B was needed.

The creators, however, quickly found solace in an acquisition by Amazon Studios, which decided to release the film as a TV movie on its namesake streaming service and gave it a nice, plum December 2020 rollout, which proved to be kismet for a film bathed in luscious reds and greens.

Production designer Mayne Berke, who has worked on vibrant, color-forward films such as “The Princess Diaries” and “Romy and Michele’s High School Reunion,” elaborates on the color scheme. “The rationale for that was twofold: green symbolizes something fresh and new, and red obviously means romance. I tried not to be overt with it and often used a pumpkin orange, particularly in the scenes in the record store.” 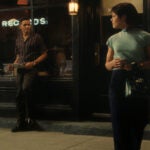 Their workplace is where their grand desire blooms, but it was only one of many backdrops, many of which director Eugene Ashe purposefully wanted to look like the Hollywood backdrops of old movies. “Eugene was influenced by Douglas Sirk for sure but ‘Singin’ in the Rain’ I definitely looked at as a model for those MGM backlot pictures,” Berke said. “I was so happy when he told me it was one of his influences as well. My overall concept was to romanticize and contrast bold colors that echoed the spontaneity of jazz.”

Frank Sinatra films of the 1950s also informed one of the most décor-forward sequences, notably a swanky New Year’s bash (in which Eva Longoria performs a sultry version of the Spanish tune “Quizás, Quizás, Quizás” later best known to Doris Day fans as “Perhaps, Perhaps, Perhaps”), especially in regard to drapery, which also figures heavily in the jazz-club scenes in which Berke, in conjunction with cinematographer Declan Quinn, employed a red and blue duo scheme that created a lavish purple hue, armed with backlit white to send the images home.

“It’s one of the few times I remember us using any kind of gel. I found over the years that blue and white especially go really well together,” Berke said. “There’s something about that combination, particularly in a nightclub, that’s extremely romantic. “

Berke said most of the scenery for the film was built, including a heavily detailed recording studio set that had to be crafted in about 24 hours after filming at Hitsville, U.S.A., in Detroit proved a non-starter. But the most challenging design aspect was creating a period NYC film completely in Los Angeles. And not in settings you would think.

“The most difficult set, hands down, was the rooftop,” speaking of the locale where Sylvie likes to sunbathe and gossip with her best pal, Aja Naomi King. “NYC rooftops are black, and all of the L.A. rooftops are white or gray, so the simple solution is to paint them, but then you end up seeing all the other rooftops [in frame]. We settled on a location in Koreatown to take advantage of its older buildings and use visual effects. But we were on a very tight budget, we had to be very judicious.” 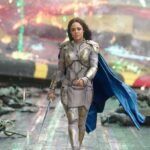 The entire production only had 30 shooting days, which also had to capture locations such as theater vestibules, hotel rooms, beaches, NYC streets, and one of the most playful concoctions, the canary-yellow TV studio where smiley TV personality Lucy Wolper (Wendi McLendon-Covey) records her cooking show that Sylvie gets her foot in the door on. “We had a lot of fun with that,” Berke said.

It probably didn’t hurt that Berke and Co. were designing for one of the most gorgeous ensembles in recent memory (including a just-about-to-burst-into-stardom Regé-Jean Page) either. And some actors – like Robert De Niro, who Berke has worked with twice – love to be part of the design conversation, but generally it is cinematographers and costume designers he is most in lockstep with.

“Here’s the biggest trick to getting a cinematographer on your side: they absolutely love backlight. It’s the most flattering lighting on a human.” And does Berke have any final hot takes for hopeful production designers? “Always find locations where you’re going to be facing south, southwest, southeast or straight south,” he said. “That guarantees you backlight all day long.”

Sylvie’s Love is available to stream on Amazon Prime Video