Odds are you’ve heard of “Yellowstone,” which has become an unlikely hit on television over its past four seasons (and counting). It’s so popular it’s already spurred a splashy prequel series, with creator Taylor Sheridan pulling double duty on both shows. But actually finding where to watch “Yellowstone” – which stars Kevin Costner as the patriarch of a powerful ranch family in Montana — is a bit tricky. That’s where we come in.

Below, we run down everything you need to know about how to watch “Yellowstone” – where it’s streaming, how many seasons are on the horizon, and where to watch it on TV.

Where Does “Yellowstone” Air?

“Yellowstone” is a Paramount Network original, and new seasons of the show air on TV on the Paramount Network. The most recent season, Season 4, premiered on Nov. 7, 2021 and wrapped up its season on Jan. 2, 2022. Season 5 debuts in November.

Where Is “Yellowstone” Streaming?

Is “Yellowstone” on Paramount Plus?

Surprisingly, no. Due to the fact that exclusive streaming rights to the series were licensed to Peacock in 2020, “Yellowstone” is not available for streaming on Paramount+.

What Is “Yellowstone” About?

The sprawling, Western-tinged series takes place in modern day and stars Kevin Costner as John Dutton, a widowed patriarch of the powerful Dutton family who oversees a massive ranch in Montana. The story finds John butting heads with local and federal government officials and the neighboring Native American reservation, all while trying to keep his Yellowstone ranch operational. 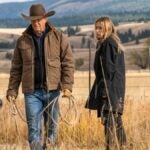 Who Is in the “Yellowstone” Cast?

When Does “Yellowstone” Season 5 Come Out?

“Yellowstone” Season 5 will premiere on the Paramount Network on Sunday, Nov. 13 at 8/7c with a special two-hour event.

Where Is the “Yellowstone” Prequel Series “1883” Streaming?

The prequel series “1883” premiered in December 2021 and revolves around the first generation of the Dutton family in the year 1883. It stars Tim McGraw and Faith Hill, and is streaming exclusively on Paramount+ as a Paramount+ original. It does not air on television, and it is not streaming on Peacock.

How Many Other “Yellowstone” Spinoffs Are Coming?

There is a further prequel series, “6666,” set in the present day that is in the works to debut on Paramount Network.

There will not be a second season of “1883” as Sheridan has said he considers that limited series a 10-hour movie. 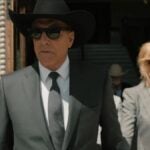