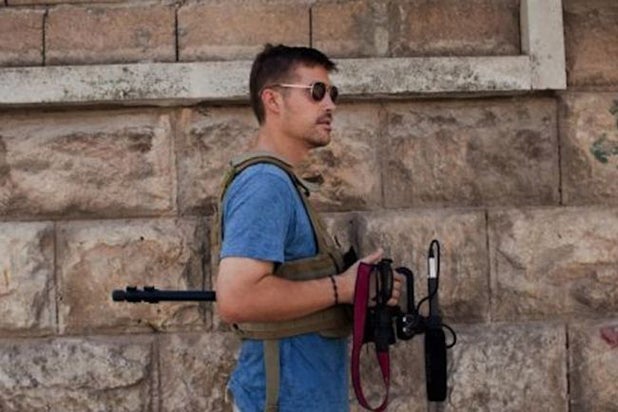 A graphic video posted on YouTube Tuesday by Islamic militants appears to show American journalist James Foley being beheaded. The video, which could not be independently verified, was removed from the Internet shortly after it was posted.

The footage shows Foley, dressed in an orange tunic and kneeling, as a hooded ISIS militant stands next to him. The militant says Foley’s execution is in retaliation for U.S. airstrikes ordered by President Barack Obama against ISIS in Iraq.

Foley is seen reading a message, presumably written by the kidnappers, and says his “real killer” is America. “I wish I had more time. I wish I could have the hope for freedom to see my family once again,” he states.

Foley was taken hostage by armed men in northwest Syria while working on a story for the GlobalPost, an online U.S. news company, in 2012 and has been missing since.

“We know that many of you are looking for confirmation or answers,” said a statement on the Facebook page for Free James Foley, the website set up for Foley’s family in the wake of his kidnapping. “Please be patient until we all have more information, and keep the Foleys in your thoughts and prayers.”

The GlobalPost confirmed in a statement that Foley was working as a freelancer for the website in November of 2012 when he was abducted in Syria.

“On behalf of John and Diane Foley, and also GlobalPost, we deeply appreciate all of the messages of sympathy and support that have poured in since the news of Jim’s possible execution first broke,” said Philip Balboni, GlobalPost co-founder and CEO.

“We have been informed that the FBI is in the process of evaluating the video posted by the Islamic State to determine if it is authentic. Until we have that determination, we will not be in a position to make any further statement. We ask for your prayers for Jim and his family.”

A second man shown in the video is identified in a caption as Time journalist Steven Sotloff. The militants say his life hangs in the balance, depending on President Obama’s next move.

In an interview with TheWrap, Time said Sotloff was not on assignment for the magazine at the time of his kidnapping in August 2013. However, the magazine did confirm that he had previously worked for Time as a freelancer.

The White House National Security Council says it is working to verify the video’s authenticity.

“We have seen a video that purports to be the murder of U.S. citizen James Foley by ISIL [ISIS],” NSC Spokesperson Caitlin Hayden told TheWrap. “The intelligence community is working as quickly as possible to determine its authenticity. If genuine, we are appalled by the brutal murder of an innocent American journalist and we express our deepest condolences to his family and friends.”