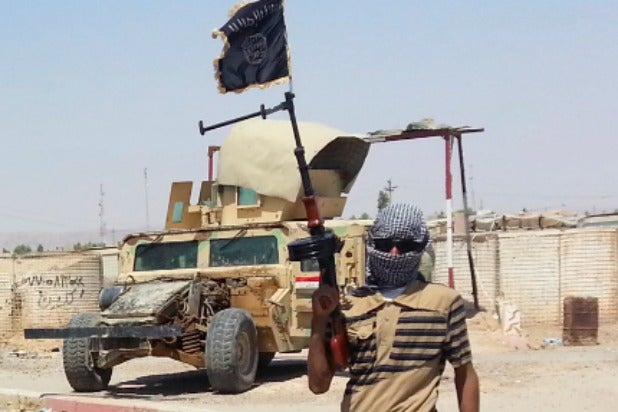 The ISIS jihadists appeared seemingly out of nowhere, waving black flags, robbing banks and ammunition dumps, and killing those they considered the wrong ethnicity or faith.

After the attacks last month, David Petraeus and Ryan Crocker didn’t necessarily want to say “I told you so,” but they wanted to say something. Petraeus had led the U.S. forces in Iraq, and Crocker had served as the U.S. ambassador there. They join other American leaders who bluntly explain what went wrong in Frontline’s new “Losing Iraq.”

Crocker says in the film, airing Tuesday, that he and Petraeus were so worried about President Obama’s plan to get U.S. troops out of Iraq that they “refused to talk about timelines.” Petraeus details how he paid out $400 million to persuade Sunni fighters to stop killing Americans and instead battle Al-Qaeda.

President Bush’s envoy to Iraq, Paul Bremer, says that when he arrived, his first directive was to “shoot the looters.” The U.S. military refused to carry it out.

TheWrap talked with award-winning “Losing Iraq” producer Michael Kirk about how he got his subjects to be so brutally honest.

TheWrap: It seems like people really had things they wanted to get off their chests.
Kirk: It was just amazing to us when all these guys, after ISIS came into the north, they all agreed to talk to us. Many of them were talking to the White House and then coming over and doing interviews with us. …

In that post-ISIS moment — just a week or two right after they grabbed all that land and were headed for Baghdad … that is a moment where people who had decided to keep their powder dry decided, OK, I’m going to enter the public discourse now, and talk about what I know, and what I remember, and what is happening that maybe we want to draw people’s attention to. So that new policy can be discussed … but also so that maybe our role as an individual gets a little cleaned up.

There seems to be an “I told you so” attitude on the part of Petraeus and Crocker, who urged Obama not to leave Iraq too quickly.
I don’t know if it’s “I told you so,” but it’s certainly “I said it out loud, everybody.” … Unfortunately, since 2011, all the major journalism institutions kind of walked away from Iraq to the extent that if these guys would have talked then, I don’t know if their voices would have been heard. … I think we were at the front of the line.

Bremer admits that when he first arrived in 2003, he told the U.S. military to “shoot the looters” in the streets. He admits it was a mistake. Did he volunteer that to you?
The first interview. Yes, yes, yes. I couldn’t believe it. … It’s like they didn’t know how stunning that really was. And still didn’t know.

And you landed Petraeus in what must be his most in-depth interview since he left the CIA.
I don’t know. I don’t keep track of things like that. But it is true that I hadn’t seen him anywhere else and I was very surprised that he agreed. … Martin Smith, who works at Frontline and is in Baghdad now, making the next part of this story — Marty read the interview, and he’d interviewed Petraeus a couple times, right after the invasion and then once a little while later. And he said it was the most open and in some ways relaxed Petraeus had been, that Marty had ever read or seen.

You have footage of U.S. troops handing over cash to Sunni fighters. Petraeus agreed to pay out $400 million in all, and he talks about it like it’s the most natural thing in the world. Was that a bit of a shocker?
The extent of it was, yeah. … Yes. Shocker is one word for it. I was glad it was something we could get out in the open and get on the record and lay it out. It’s obviously something many people knew or thought they knew, but needed both clarified and verified.

Obviously you didn’t ask Petraeus about his reasons for leaving the CIA — the extramarital affair.
He would always say in response to that question… ‘It’s the CIA and I can’t really talk about it.’ [Laughs.] Forthcoming has its limits.