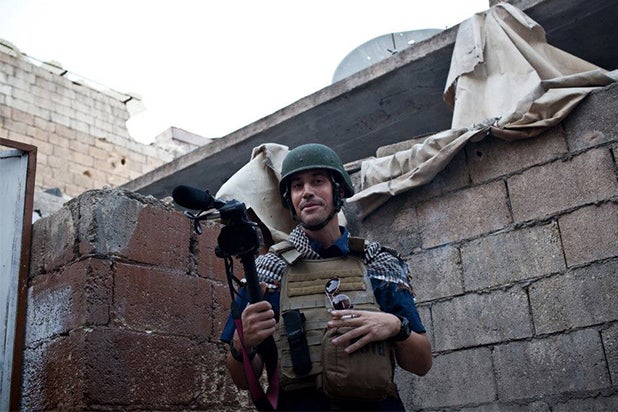 Twitter has begun suspending accounts that post images relating to the execution of James Foley, the journalist who was beheaded by ISIS militants.

Twitter CEO Dick Costolo announced the policy change via his own account early Wednesday, writing, “We have been and are actively suspending accounts as we discover them related to this graphic imagery. Thank you.” While the account is not verified, a spokesperson at the social media giant confirmed to TheWrap that the tweet did indeed come from Costolo.

The Twitter executive included a link to a New York Times story on Foley in his message.

Also read: James Foley’s Mother: ‘We Have Never Been Prouder of Our Son’

We have been and are actively suspending accounts as we discover them related to this graphic imagery. Thank you https://t.co/jaYQBKVbBF

A video of Foley being executed was posted Tuesday on YouTube. The disturbing footage shows Foley, dressed in an orange tunic and kneeling, as a hooded ISIS militant stands next to him.

The militant speaks perfect English in what sounds like a British accent. The masked man, who is holding a knife, says Foley’s execution is in retaliation for U.S. airstrikes ordered by President Barack Obama against ISIS in Iraq. U.S. and British security agencies are trying to determine the man’s identity.

As the footage plays, Foley is shown reading a message, presumably written by the kidnappers, and says his “real killer” is America. “I wish I had more time. I wish I could have the hope for freedom to see my family once again,” he states.

The militant then stands next to Steven Sotloff, an American contributor to Time. The killer issues a chilling threat, saying, “The life of this American citizen, Obama, depends on your next decision.”

In an interview with TheWrap Tuesday, Time said Sotloff, 31, was not on assignment for the magazine at the time of his kidnapping in August 2013.

ISIS, which stands for “The Islamic State of Iraq and Syria,” has been on a deadly rampage in hopes of creating an Islamic state in the Middle East.

President Barack Obama addressed Foley’s on death Wednesday, saying that the murder “shocks the conscience of the entire world.”

Mr. Obama added that the group “speaks for no religion,” calling its ideology “a cancer that must not spread.”