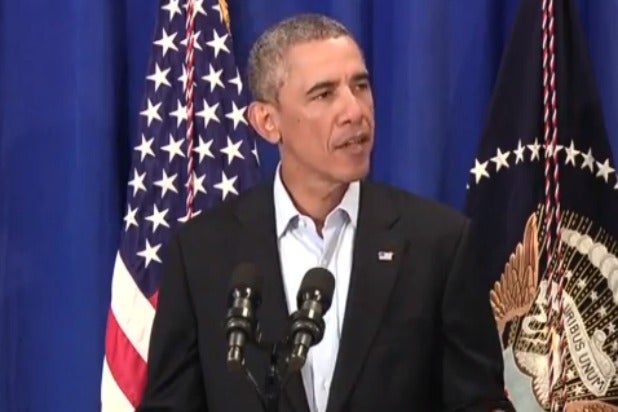 President Obama denounced the ISIS murder of journalist James Foley, saying the “entire world is appalled” by the group’s actions and that the killing “shocks the conscience” of all people.

The president said the group, also known as ISIL, “speaks for no religion” and has killed Muslims and Christians alike as it tries to force them to convert to a hardline version of what it considers Islam.

“People like this ultimately fail. They fail because the future is won by those who build and not destroy,” Obama said. “The world is shaped by people like Jim Foley, and the overwhelming majority of humanity who are appalled by those who killed him.”

He also called the group’s ideology “a cancer that must not spread” and praised Foley for his courage in reporting on the hardships faced by the people of Syria.

“He was a journalist, a son, a brother and a friend,” Obama said. “He reported from difficult and dangerous places, bearing witness to the lives of people a world away.”

Also read: James Foley’s Mother: ‘We Have Never Been Prouder of Our Son’

“Jim was taken from us in an act of violence that shocks the conscience of the entire world,” Obama continued. “He was 40 years old, one of five siblings, the son of a mom and dad who worked tirelessly for his release.”

He said he had spoken to Foley’s family and told them “that we are all heartbroken at their loss and join them in honoring Jim and all that he did.”

He said Foley’s life stands in “stark contrast” to the lives of his killers.

“They have rampaged across cities and villages killing innocent, unarmed civilians in cowardly acts of violence,” Obama said. “They abduct women and children and subject them to torture and rape and slavery. They’ve murdered Muslims, both Sunni and Shia, by the thousands. They target Christians and religious minorities, driving them from their homes, murdering them when they can for no other reason than they practice a different religion. They declare their ambition to commit genocide against an ancient people.”

He added: “Their victims are overwhelmingly Muslim, and no faith teaches people to massacre innocents. No just God would stand for what they did yesterday and what they do every single day.”

He also said that when Americans are harmed, “we do what’s necessary to see that justice is done.” Obama spoke two days after he again vowed that the U.S. would not return thousands of troops to Iraq. Instead, the U.S. is supporting Iraqi government forces and Kurds who are battling ISIS.

Foley, who was taken hostage in November 2012, was killed in an execution video that ISIS briefly posted online Tuesday, before it was taken down.

Secretary of State John Kerry also weighed in on Tuesday, saying Foley “went to the darkest of places to shine the light of truth.”

“Nothing could stop him from sharing with the world the reality of what was happening on the front lines in Iraq and Afghanistan, or the struggle against a brutal dictator in Libya, and he was just as determined to do the same from Syria,” Kerry said. “He was brave and bold, and no masked coward can ever steal the legacy of this courageous American who lived out the meaning of the word journalism.”

In another statement, House Minority Leader Nancy Pelosi said Foley “dedicated his life to reporting from some of the darkest and most dangerous conflicts in the world.”

“Foley’s murder by ISIS militants is a brutal crime beyond the circle of civilized behavior. The targeting of journalists is absolutely unacceptable – and we will bring justice to his killers,” she said.

U.S. Sens. John McCain and Lindsey Graham said they would also “celebrate his life, mourn his loss, and hold his family uppermost in our thoughts and prayers.”

“In this cowardly and gruesome murder of an innocent man, we see the true nature of the evil that confronts us. As President Obama rightly said today, ISIS has nothing of value to offer the world, only terror, slavery, and death. It is an enemy of humanity, a darkness that will spread as far as it can, unless it is stopped,” they said in a joint statement.

“We agree with the President that America must take the necessary actions against ISIS to protect our people, but ISIS is not just a threat to our personnel serving in Iraq. It is a threat to our nation, as all of our top military, national security, and intelligence leaders have clearly stated. America and our allies and partners will only be secure when ISIS is defeated. That means we must get beyond half-measures, tactical responses, and defensive actions. We need to develop a comprehensive strategy – political, economic, and military — to go on the offensive against ISIS, both in Iraq and Syria. As we have seen in recent days, the combination of U.S. air power, together with the provision of arms and advisers in support of partners on the ground, can have devastating effects. We should step up these efforts as part of a broader strategy to eradicate ISIS. Unfortunately, in his remarks today, the President did not articulate a commitment to the comprehensive strategy necessary to defeat ISIS.”

The National Press Club noted that in Syria alone, more than 60 journalists have been killed since 2011, according to the Committee to Protect Journalists.

“We condemn in the strongest words possible the execution of a journalist who was carrying out his professional duties. Our thoughts and prayers go to James’s parents, John and Diane Foley, who scoured the world to find their son, an extraordinary and brave photographer who sacrificed his personal safety to inform the world about the war in Syria,” said NPC president Myron Belkind. “James paid with his life. We can best honor James by holding those who try to silence the press accountable and to continue reporting, even in the world’s most dangerous places.”

Ira Teinowitz contributed to this story.