Jacob Anderson will play the vampire Louis in the AMC series “Interview With the Vampire,” which is based on Ann Rice’s popular novels.

“Interview with the Vampire” will premiere on AMC+ and AMC next year.

Anderson will play opposite Sam Reid, who was cast as Lestat. 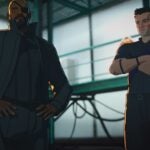 Also Read:
How ‘What If’ Turned the Avengers Into an Agatha Christie-Style Whodunit

“Interview With the Vampire” was previously adapted into a 1994 movie starring Tom Cruise and Brad Pitt. Pitt played Louis while Cruise was Lestat.

Anderson is best known for playing Grey Worm on HBO’s “Game of Thrones.” He will star in the upcoming season of “Doctor Who” as Vinder. He is represented by Sarah Camlett at Independent Talent Group and Mike Smith at Principal Entertainment LA.