A parade of Republican state officials from around the country told the Jan. 6 Special Committee on Tuesday how Trump tried to pressure them to overturn election results, including sending Trump supporters to officials’ homes, waving weapons and shouting insults and threats of violence.

The committee kicked off Day 4 with chairman Rep. Bennie Thompson focusing on the ongoing damage from the Capitol Riot – saying the evidence would show that death treats against Mike Pence weren’t “an isolated scheme to overturn the election” and suggesting the Trump election lie is “now corrupting our democratic institutions.”

The morning session focused on a Trump campaign effort to muster “fake electors” to send to Washington – even they knew it wasn’t legally sound. Rep. Adam Schiff, who was running the inquiry, said that pressure campaign to send “alternate electors” spanned several contested states, including Arizona.

‘No Evidence’ in Arizona

Rusty Bowers, Arizona State House Speaker and a self-described conservative Republican, told the committee that Trump adviser Rudy Giuliani told him he had evidence of hundreds of thousands of illegal votes by illegal aliens in Arizona. Bowers said he asked for evidence.

Bowers said Giuliani responded: “‘We’ve got lots of theories, we just don’t have the evidence.'” 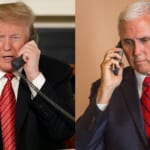 “I don’t know if the was a gaffe,” said Bowers. “Or maybe he didn’t think through what he said. Both myself and the others in my group and my counsel, we kind of laughed about it.”

“I did not feel that the evidence warranted a hearing on election fraud, and I did not want to be used as a pawn,” Bowers continued. He said Giuliani pressured him to send “alternate electors” overturning the election and “let the courts sort it out” later – suggesting Giuliani knew it wasn’t a legal move.

“I told him, you’re asking me to do something that’s never been done in the history of the United States … without sufficient proof,” Bowers said, adding that  he refused, telling Trump himself that he “would not break the law” for him.

Bowers said his office received 20,000 emails and tens of thousands of voice mails and text messages of harassment from Trump supporters.

Tuesday’s witnesses included Georgia’s Secretary of State Brad Raffensperger, who received a call from Trump on election night asking him to “find” 11,780 votes to overturn Biden’s narrow win; and Gabriel Sterling, another Georgia elections official, who rose to prominence after he gave a press conference harshly criticizing Trump for refusing to accept the state’s election results.

“Mr. President, it looks like you likely lost the state of Georgia,” Sterling said at the time. “We’re investigating … And you have the rights to go through the course. What you don’t have the ability to do — and you need to step up and say this — is stop inspiring people to commit potential acts of violence.”

Georgia Secretary of State Brad Raffensperger, who calls himself a conservative Republican, told the committee that Joe Biden clearly carried his state “by about 12,000 votes.” Raffensperger said these votes were verified by three counting methods, including computer scanning and hand counts by people.

He said Trump made false claims of shredding of ballots, and that the former President threatened him and his staff with criminal prosecution if they did not overturn the election. He said Trump supporters started making “sexualized threats” to his wife and broke into the home of his daughter. 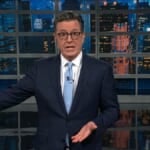 Raffensperger said he never considered caving: “I had to be faithful to the Constitution.”

Sterling told the committee that Trump and Giuliani took a small piece of television video completely out of context and misrepresented the footage. Sterling said Trump and Giuliani kept repeating false statements that “secret suitcases” of ballots were opened at the central vote counting site in Georgia.”Those were proper containers properly handled by election workers,” Sterling said.

Election Workers: ‘I lost my name … I lost my reputation’

The most emotional moment of the day came when the committee heard testimony from a mother and daughter who counted votes for the state of Georgia and were publicly targeted by Trump and Giuliani with unsubstantiated accusations of election fraud.

Wandrea “Shaye” Moss and her mother were shaking when she told the committee that she still is afraid to go out in public, ever since Trump targeted her and called her mother a “professional vote scammer.”

She said Trump supporters assaulted her with a barrage of obscene text messages that included racist comments and threats of violence, then came to her home to shout similar threats. She said she had worked on elections in Fulton County for more than 10 years, and never before had any threats or problems.

“I got into this because I’ve always been told by my grandmother how important that it is to vote, and there was a time when we weren’t allowed to vote,” said Moss, a Black woman.

She said her mother handed her a “ginger mint” while they were working at a central ballot-counting site. Giuliani used a TV video clip of that moment and released a public statement claiming that the mother and daughter were “surreptitiously passing around USB ports as if they’re vials of heroin or cocaine.” 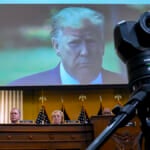 After that, Moss said even her grandmother received threats from Trump supporters at her home, with some trying to force their way into the home while shouting that they were pursuing a “citizen’s arrest.”

Moss’s mother, Ruby Freeman, told the committee in video testimony that Trump has ruined her public image in her community: “Everyone in my community always called me ‘Lady Ruby’ … I’ve lost my name and I’ve lost my reputation.”