Donald Trump called Mike Pence “the P-word” and “a wimp” during a phone call in which the president was trying to convince the vice president to take the unprecedented – and almost certainly illegal – step of singlehandedly refusing to certify the 2020 election, according to testimony Thursday on Capitol Hill.

In a brief clip of video testimony at the Jan. 6 committee hearings, Julie Radford, Ivanka Trump’s chief of staff at the White House, said her boss told her “that her dad had just had an upsetting conversation with the VP.”

She was asked by the questioning attorney whether she remembered what name Trump called Pence. 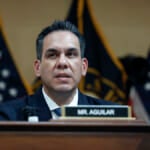 Nicholas Luna, a former Trump assistant, added in his own testimony that “I remember the word ‘wimp.’ I remember he said, ‘You are a wimp. You’ll be a wimp.”

And in a separate testimony video, Ivanka Trump described the call in her own words: “It was a different tone than I’d heard him take with the vice president before.”

Pence attorney Greg Jacob, who gave lengthy live testimony on Thursday, said he observed Pence in the moments after that phone call. “He was steely, determined, grim,” Jacob said.

Pence completed the counting of the votes that same evening, and the vote was certified. The Jan. 6 committee hearing on Thursday focused on Trump’s campaign to pressure Pence to take action to stop the vote certification.