The House Select Committee to Investigate the Jan. 6 Attack on the U.S. Capitol hit another gear Monday with testimony including fresh allegations of Trump campaign-donor fraud, former Attorney General Bill Barr chuckling at “2000 Mules” and tales of a drunken Rudy Giuliani on Election Night.

Several top advisers to former President Donald Trump detailed in testimony and video packages how they advised him not to claim he won the 2020 election and was cheated by voter fraud.

“He betrayed the trust of the American people,” said Committee Chair Bennie Thompson, D-Miss. “He lied… and he ignored the will of the people.” 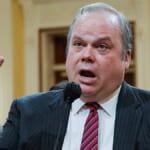 Here are the key moments from Monday’s testimony, the second day of hearings that are scheduled to resume Wednesday.

The committee detailed bombshell allegations of Trump fleecing his own supporters from an account of $250 million in donations that he said would go to fight election fraud, but then kept for other purposes.

Amanda Wick, senior investigating counsel for the House select committee, displayed numerous Trump e-mails and other literature asking his supporters to donate to the Election Defense Fund. The problem, Wick said, is that investigators found that this fund did not exist.

Wick said Trump instead put the money into a newly created “Save America” political action committee. Wick said the money then was transferred to several other accounts, including the Trump Hotel Collection. Use of the funds is still under investigation.

“We found evidence that the Trump campaign misled donors as to where their funds would go, and what they would be used for,” said committee member Zoe Lofgren, D-Calif.

Everyone Told Trump to Stand Down

Eric Herschmann, former Trump attorney and senior adviser, joined the ranks of advisers who told the committee that they urged Trump to stop making false claims of stolen votes.

Herschmann recalled a conversation he had with Trump adviser John Eastman, a California attorney who was pushing Trump’s stolen votes narrative.

“I said to him, ‘You must be out of your f—ing mind. From now on I only want to hear two words come out of your mouth — orderly transition’,” Herschmann told the committee.

“I haven’t seen anything that changes my mind on [the outcome of the election], including ‘2000 Mules,’” laughing at his own un-prompted reference.

Asked to elaborate on the film, Barr said:

“In a nutshell … I was unimpressed with it … . The cellphone data is singularly unimpressive. If you take 2 million cell phones and figure out where they are physically in a big city like Atlanta or whatever, just by definition you’re going to find many hundreds of them have passed by and spent time in the vicinity of these boxes. The premise that that’s somehow a mule is indefensible.”

Barr said he told Trump that “the clams of fraud were bullshit,” in video testimony played for the committee. Trump’s repeated assertions that voting machines were rigged were “idiotic claims,” Barr told the committee, adding that in the last 19 months he has seen zero evidence of fraud in the 2020 election.

“It was doing a great disservice to the country,” said Barr, a lifelong Republican who also served as attorney general for President George H.W. Bush. He said he resigned from Trump’s administration in December 2020 because of the false claims. “The election was not stolen from fraud. He’s become detached from reality if he (Trump) really believes this stuff.”

Rudy’s Was Maybe Not the Most Sober Advice

Rudy Giuliani was drunk while giving advice to Trump on Election Night, testified Jason Miller, former Trump senior campaign adviser – offering at least one explanation for some of the “crazy” claims of election fraud made by the Trump attorney and confidant.

“The mayor definitely was intoxicated,” Miller told the committee.

The two advisers clearly split on Election Night, with Giuliani insisting that the president should declare victory before the mail-in votes were counted.

Miller said he strongly advised that no declaration be made until all the votes were in. Trump and Giuliani went ahead and declared victory anyway.

According to the U.S. Census Bureau, in the 2020 election, 69% of voters nationwide cast their ballots “nontraditionally” — by mail on and/or before Election Day, the highest rate of nontraditional voting for a presidential election. The bureau stated that 43% of the vote was done by mail.

By comparison, about 40% of voters cast their ballots by mail and/or prior to Election Day in 2016.

Under Stirewalt’s direction, Fox News declared a victory for President Joe Biden in Arizona early on election night. Stirewalt said his prediction came from analysis of polling data and incoming results, in cooperation with The Associated Press.

“Our poll in Arizona was beautiful,” he said.

Stirewalt told the committee Democratic voters prefer mail-in ballots, so it wasn’t news to him when the late vote counts went to Biden. Even Trump was aware of this phenomenon, and was warned before Election Night to expect a shift when mailed ballots were counted.

“It happens every time,” Stirewalt said, adding that he also figured that ““Republicans were going to try to exploit this anomaly.”