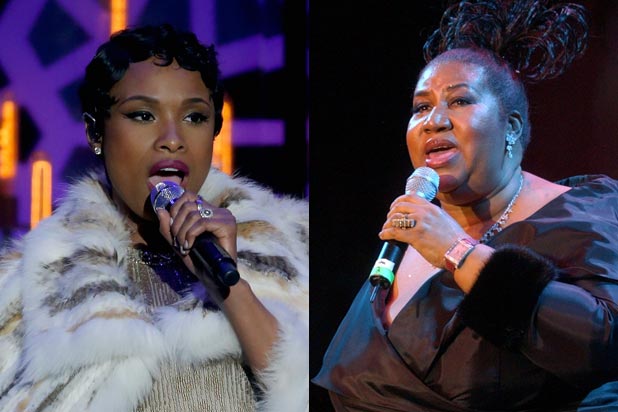 Oscar winner Jennifer Hudson is in discussions to play Aretha Franklin in a biopic that “Straight Outta Compton” producer Scott Bernstein developing under his SMB Films banner, an individual familiar with the project has told TheWrap.

Hudson has not been officially cast as there is no deal in place, but a representative for the “Dreamgirls” star has acknowledged that conversations have taken place.

The Untitled Aretha Franklin Project, which has been in the works for several years, will chronicle the “Respect” singer’s rise to fame in the ’60s and ’70s and delve into her relationship with her abusive ex-husband Ted White.

Franklin is one of the top-selling female musicians of all-time, having sold more than 75 million records worldwide that won her 18 Grammy Awards. She was also the first woman inducted into the Rock and Roll Hall of Fame.

“The singing is certainly going to be a very, very integral and important part of it,” Franklin told Billboard in June 2014. She also told Glamour in October 2012 that accuracy is of paramount importance to her, saying “let’s present the facts and be as creative as possible with them.”

Bernstein, who did not immediately respond to a request for comment, is coming off the rousing success of “Straight Outta Compton,” which grossed $60.2 million at the domestic box office its opening weekend. The gritty drama told the story of N.W.A. and its members Ice Cube, Dr. Dre and Eazy-E.

They aren’t the only African-American artists to receive the movie treatment this year, as Don Cheadle’s Miles Davis movie “Miles Ahead” will close the New York Film Festival, while Zoe Saldana and Queen Latifah played Nina Simone and Bessie Smith in Cynthia Mort’s “Nina” and HBO’s “Bessie,” respectively.

Hudson most recently appeared on the hit Fox series “Empire” and is expected to return for its second season. She’s represented by CAA, manager Irving Azoff and attorney Bill Abrams.

While Hudson has long been rumored to be a contender to play Franklin, her probably casting was first reported by the Tracking Board.