John Oliver on Sunday made the case for monetary reparations for Black Americans — not by citing slavery but more recent cases of housing discrimination, including a notorious case from Manhattan Beach, California.

“We’re not actually talking about reparations for slavery here. We should, but that is a different conversation,” he said on Sunday’s “Last Week Tonight.” “We’re talking about housing discrimination.”

He then delved into the family of Anthony Bruce, a Black family who owned two oceanfront lots in Los Angeles County and faced enormous pressure to abandon their home — first from the Ku Klux Klan, which burned a cross out in front of their lodge, and then from the local government in the 1920s. “The city decided to take the property under the guise of eminent domain,” one expert said.

“Wow. So when the cross burn didn’t drive the Bruces out of town, the city called in a lawyer to finish the job. And that tells you a lot about how racism in America works,” Oliver said. “Sure, the vigilante racists are spooky, but you’ve really got to worry when the motherf—ers with advanced degrees show up.” 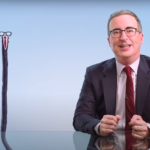 Oliver made it clear that “what Manhattan Beach did to the Bruce family was clearly unforgivable” and offered his suggestion for making it right: actual reparations.

Noting that Manhattan Beach recently authorized $350,000 to erect art commemorating the family, Oliver said the gesture wasn’t enough. “If you took something worth $20 million, $350,000 just doesn’t cover it. Especially when none of that money went toward the family you stole it from,” Oliver argued. “There is pretty obviously only two ways of making this right. Give the Bruces $20 million or give them their land back.”

Oliver went on to note how housing discrimination against Black Americans has continued in more recent years through redlining, blockbusting and overt discrimination in federal home loans.

“The only really strange thing about paying reparations to Black people is that we haven’t done it yet,” Oliver said. “When you deprive somebody of something, you make it right by paying what you owe.”

Oliver acknowledged the challenges of implementing a fair and equitable reparations program. “Now, figuring out exactly how to pay might well get complicated,” he said. “But realizing that you have to should be pretty simple, because this is a wound that we are actively choosing not to heal ― and it is hurting real people every day.”

You can watch the full segment, in which Oliver goes in-depth on how housing discrimination continues to exist, in the video above.