“Last Week Tonight” didn’t air a new episode this week, but the HBO late-night series did reveal some new content online, as host John Oliver couldn’t delay talking about a topic near and dear to his own personal anatomy: “John Dillerman,” that Danish kids program about a man with a very large penis, which has sparked criticism since its premiere in January.

“As the head of [the Danish broadcast network’s] children’s department made clear, it’s as desexualized as it could possibly get,” Oliver said during a standalone segment shared to “Last Week Tonight’s” YouTube page Sunday. “The problem is, there are some both in, but especially outside Denmark, who can’t seem to get their head around the charms of this show.”

Oliver used the example footage of a British morning TV host grilling a Danish expert who was defending the show as being about “the penis that a young child has.” The host fired back, “20 foot-long and striped? That’s not the penis that everybody has.” 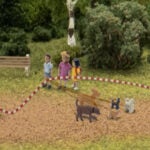 “Well hold on there, because you don’t know that that is not the penis that everyone has. And that actually brings us to the reason that I wanted to talk to you about this show. Because the reason ‘John Dillermand’ resonated so much with me isn’t just that I found it interesting or charming or funny. It’s that I, too, happen to have a 20 foot-long animated hose dong,” Oliver said, revealing his cartoon penis friend on screen.

“As you can see, he has a suit and glasses, just like me. And for people like myself, ‘John Dillermand’ is the representation on television that we’ve been looking for for a long time. Because for us, our penises aren’t necessarily sexual, are they? No, they’re multitalented. Look, he can wiggle. He can show off his muscles. He can even make penis animals. Oooh, a giraffe! Fancy boy! And he can become a limp worm, which, yeah, I will admit is well within the wheelhouse of most penises. Of course, unfortunately, I can’t keep him out for long because if he inadvertently gets excited, he siphons off about a gallon of my blood. So back you go before I collapse, OK?” 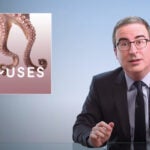 Oliver closed out the bit by adding, “And that’s it. That’s really all I wanted to tell you. That and the fact that we’ll be back July 25th. Hey, Discovery, you’re going to own this soon. Congratulations on the merger. It’s going to go great.”