Depp’s childhood friend and neighbor Isaac Baruch took the stand and captivated the courtroom, saying he was sick of the couple’s drama, which he largely blamed on Heard.

“It’s six years. Am I angry anymore? What I am is tired, and I want this all to end — her to go heal, him to go heal. So many people have been affected by this malicious lie that she started and she created,” Baruch said.

Baruch lived in the same building as Depp and Heard, and said the couple initially had a good relationship. “They were very loving with each other. They treated each other like gold,” he stated, adding that he “never” saw them get physical with each other and only witnessed the pair argue twice. 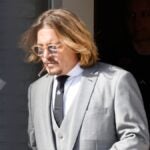 Depp and Heard were married from 2015 to 2017. But Baruch said on May 21, 2016, he saw broken glass and wine splashed on the walls and puddled on the floor in the apartment hallway. He recalled the next day, Heard telling him in the hallway: “Johnny came by last night and he got violent, so I’m changing the locks.”

In the days following, Baruch said he saw Heard several times but never noticed any signs that she was abused. “There’s no redness, there’s no swelling, there’s no bruises, there’s no cuts, there’s no nothing. Just Amber looking like Amber.”

An attorney for Heard pressed him about his knowledge of makeup, suggesting Heard had covered up any injuries. Baruch, a charismatic witness, responded with laughter several times when asked about a specific concealer and said he wasn’t familiar with cosmetics. But he said he carefully inspected Heard’s face and saw no bruises. “I’m looking at a cheek, I’m looking at her chin, I’m looking at the other side of the face. I’m looking at the whole thing. And I don’t see anything,” he said.

Heard’s attorney then asked Baruch if he was angry with the “Aquaman” actress.

“About the phony pictures that were taken and put in the tabloids, and the fake narrative and the way she’s got a fraudulent DV [domestic violence] claim to extort and blackmail a man? Yeah, that kind of got me frustrated, confused, angry, upset. Yes,” he responded.

At one point, Baruch was overcome with emotion. He tearfully told the jury, “It’s not right. It’s not fair what she did and what happened for so many people to get affected from this. It’s insane how this happened.”

During cross-examination by Heard’s attorney Elaine Bredehoft, text messages from October 2016 between Depp and Baruch were revealed. In one exchange, Depp referred to Heard’s “rotting corpse.” Baruch confirmed the message was sent, “Yeah, it was written.”

Earlier in the day, Depp’s older sister and personal manager, Christi Dembrowski, returned to the stand for cross-examination and told jurors the “Pirates” star was a “very sad” person during his troubled marriage to Heard.

When Heard’s attorneys questioned Dembrowski about Depp’s allegedly toxic behavior and aggressive text messages he sent in May 2014, his sister didn’t recall the examples but told the court, “They were arguing all the time.” 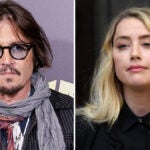 Heard’s attorney Ben Rottenborn pressed Dembrowski about Depp’s alleged drug abuse and financial problems. Dembrowski told the court she hired a doctor to help the actor with an addiction to pain pills. Rottenborn then questioned her about email updates the doctor sent her. “He wrote that [Depp] has no accountability for his behaviors,” said Dembrowski as she read an email aloud.

Just two days in, the trial has been filled with mudslinging from both sides. During opening statements, Depp’s attorneys said Heard concocted stories of abuse because her husband “wanted out” of the relationship. Heard’s lawyers fired back during their opening statements saying Depp was punishing Heard because she wanted a divorce.

Depp is suing Heard for $50 million, claiming she libeled him in a 2018 op-ed piece in the Washington Post, derailing his career and costing him a lucrative role in the “Pirates of the Caribbean” franchise. Heard didn’t name Depp in the article but she described herself as a “public figure representing domestic abuse.”

Depp’s attorney Ben Chew said for decades Depp’s name was associated with “success at the box office. Today, his name is associated with a lie, a false statement uttered by his former wife.” Chew said no one ever accused Depp of being violent and this is “a case about how devastating words can be when they are false and uttered publicly.”

Heard’s attorneys claim she had a right to free speech and “Amber did suffer abuse.” Heard’s attorney’s told the jury she suffered physical, emotional, verbal and psychological abuse throughout their marriage, saying Depp was prone to drug and alcohol induced blackouts and that he sexually assaulted her.

Heard filed a $100 million counterclaim for defamation for statements made by Depp’s attorney Adam Waldman. Co-council Elaine Bredehoft showed the court statements where Waldman called Heard’s story “Abuse hoax” and said his comments were “tremendously damaging to Amber” and her career.

Both Depp and Heard are expected to take the stand during the trial, which is expected to last six weeks.