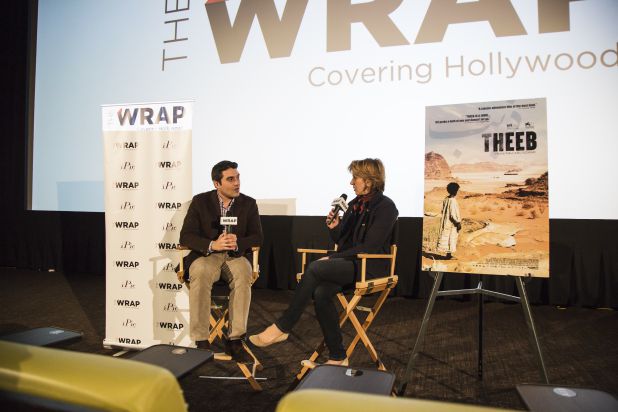 “It’s the most successful Arab film in Jordanian history,” director Nowar told moderator Sharon Waxman at TheWrap’s Award Screening Series at the iPic Theater in L.A. on Tuesday. “I had never seen a film camera until one arrived on the set. The Bedouins had never seen a film before. I got them their first passports — I made up their birthdates, all Jan. 1 — and Venice freaked them out, because they were on a speedboat. They walked into their first film, which was their film, and got a 10-minute standing ovation.”

Nowar, who got training with The Attack” director Ziad Doueri and “JFK” writer Zach Sklar at Jordan’s first Sundance Screenwriting Lab, at first tried to make “a John Ford Western with Bedouin culture,” he said, or a Sergio Leone-meets-Kurosawa’s samurai epic.

But Nowar was also inspired by the quadruple 2002 Oscar nominee “City of God,” whose actors were slum kids in Rio de Janeiro trained in drama workshops. Nowar did similar work with a tribe in north Jordan.

“We found the last [nomadic Bedouin tribe] that was settled, in the late 1990s, and we lived with them for a year,” said Nowar, who began with a script about what Bedouins call “the Dark Days,” when bandits roamed and British battled Arab Ottomans in World War I, with Bedouins as collateral damage.

“The British were trying to draw Ottoman forces away from the front in Gallipoli into the Arabian desert,” said Nowar, who spent half his life in Jordan and half in Oxford, England. “So they could win in Gallipoli.”

If you think “Gallipoli” made WWI look like a cynical endeavor, imagine it from the point of view of a 12-year-old Bedouin whose dad was killed.

Nowar did so, with eight months’ input from village elders and deep acting work by his newbie cast. “In 1916, they were pretty much living exactly as they had for thousands of years,” said Nowar. “Listening to the old men tell stories, they feel like Old Testament stories.”

The Bedouins hated the cheesy telenovelas on TV, which take a “pretty racist approach to their culture,” said Nowar, likening them to Indians saying “How” in old Westerns. “They wanted to right the wrongs.”

They also wanted all women out of the movie, so out they went. “It became very conservative and we weren’t allowed to film a woman,” he said. However, local women made all the authentic props in the film, and “Theeb” brought change to a region where many people fall into fatal addiction or fundamentalism.

“Now women can take workshops and become actresses, so [in my] next film there’ll be women in lead roles.” Nowar won’t spill the plot of his upcoming film, but says it’s set in the 1920s in another part of Jordan, and concerns “a princess, a female leader based on a famous historical character.”

Also, now the actors in “Theeb” have careers. “Two of them have acted in two more films, and drama series on TV. Before “Theeb,” when Nowar asked Bedouins if they’d like to be a movie star, they’d say what’s that, and what for? “Acting in film — to a Bedouin, that sounds stupid,” said Nowar. “‘I’d rather go hunting.'”