Four years ago, CBS decided to “retool” its struggling Kevin James-led sitcom “Kevin Can Wait” for its upcoming second season. Lead actress Erinn Hayes, who played Kevin’s wife, would be written off the show and replaced by Leah Remini, officially reuniting the “King of Queens” duo on a weekly basis. The question then became one of what the series would do to write Donna off. Divorce? A long work retreat? Always doing something else, just off screen? Come “Kevin Can Wait’s” second season premiere, the series went with perhaps the worst possible creative choice: It killed her off, with barely a line of dialogue about it, then moved on to some forgettable punchline. If there was any doubt that this type of “Sitcom Wife” was considered expendable and essentially a prop, this moment settled things.

“Kevin Can Wait” was canceled after its second season.

AMC’s new “Kevin Can F**k Himself” is a hybrid series — one-part broad, bright and loud multi-camera sitcom, one-part single-camera prestige AMC drama — that looks at the world through the eyes of a “Sitcom Wife” who longs to escape her seemingly inescapable fate as the nag and butt of every joke. Set in Worcester, Massachusetts, the series follows Allison McRoberts (Annie Murphy, “Schitt’s Creek”) as she struggles with playing this role in a world that revolves around her loudmouth husband, another titular Kevin (Eric Petersen).

As the “Sitcom Wife,” Allison always finds herself begrudgingly roped into Kevin’s shenanigans, like his two parties at once scheme (a sitcom staple) or his misguided and overblown rivalry with the “foreign” new neighbors. And it’s her unwillingness to go along with Kevin’s dunderheaded ideas that make her the punching bag for not just Kevin but his sidekicks: his even-more-imbecilic best friend Neil (Alex Bonifer), his set-in-his-ways father, Pete (Brian Howe), and Neil’s sardonic sister, Patty (Mary Hollis Inboden).

The hybrid aspect of the series, created by Valerie Armstrong (with Craig DiGregorio serving as showrunner), especially comes into play when Allison is out of Kevin’s orbit and the show enters the single-camera territory of a typical, prestige AMC series. In these moments, the McRoberts house is no longer brightly lit; it’s drab, seemingly allergic to any nonnatural light. Surely, no one expected this to be the answer to what happens when the audience follows the “Sitcom Wife” out of her husband’s domain, but to be fair: None of the shows that inspired this series ever thought to ask that question in the first place. “Kevin Can F**k Himself” not only investigates the interior life of Allison McRoberts, but also that of Patty, who clearly has to put on a mask as well to be “one of the guys.” In fact, as Allison’s life has long been one of isolation, thanks to Kevin, it’s her unexpected and developing alliance-turned-friendship with Patty that serves as the series’ heart and soul. And Murphy and Inboden, who live in both the broad sitcom setting and the more grounded single-camera worlds, have the most challenging acting assignments.

But the show’s weakest element involves the return of Allison’s teenage “love,” Sam (Raymond Lee). While the idea of a lost love works conceptually — planting the idea for Allison of what she might be missing in current marriage — it never really connects as a romantic storyline.

When the series begins, despite how much she’s clearly suffering, Allison is still a dreamer. She dreams of a perfect life with Kevin, in a perfect house in a perfect neighborhood. In this dream, she’s even still serving Kevin, just as she does in reality, only with a perfect ‘50s sitcom housewife aesthetic. It’s not until a world-shattering revelation from Patty that Kevin stupidly blew their savings years ago that Allison starts dreaming about a life without Kevin. As Allison starts to reconsider her 10 years of marriage, we learn that Kevin is far more than just the comedic oaf that the laugh track would want us to believe. 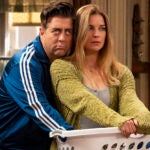 Also Read:
How ‘Kevin Can F**k Himself’ Crammed a Multi-Cam Sitcom Inside a Drama

As in many of the sitcoms “Kevin Can F**k Himself” satirizes, you may begin to wonder why Allison would marry Kevin in the first place. While the first four episodes (of the eight-episode first season) don’t explicitly answer that question, the picture gradually becomes clearer about what Allison and Kevin’s relationship really had been like—when you take away the sitcom sheen of Kevin’s behavior. People around Allison, from family members to physicians, regularly tell her how lucky she is to even be married to Kevin. And despite his juvenile behavior, Kevin is clearly a magnetic personality, whom others gravitate toward, even despite their best efforts. That’s part of what makes Kevin so dangerous, even if we only see him through a sitcom lens. In fact, the series takes inspiration from classic horror in that there’s a sense of dread built into the very idea of what things will look like if we ever actually see Kevin in the show’s single-camera world.

The term “gaslighting” may be overused at this point, but it clearly applies to Allison’s experience. As she starts to imagine life without Kevin, she also begins to think about how Kevin’s actions have taken away her friends, her driving privileges, her career prospects — and how he would always blame her for those things. While Allison initially takes pride in getting Kevin to believe something she wanted him to do was actually his idea, the series progressively reveals just how much of her life is the result of Kevin doing just that to her.

As disorienting as the back-and-forth can be between both camera formats, both stylistically and tonally, the structure of “Kevin Can F**k Himself” allows the audience to be quickly conditioned to expect a certain flow. Curiously, one result is that Kevin emerges as little more that a sitcom brute who lacks the depth and interiority that we discover in Allison (and Patty) in all those single-camera scenes. He may be the title character, but it’s the women who actually command our attention.

One result is that while Kevin emerges as little more than a sitcom brute who lacks the depth and interiority that we discover in Allison (and Patty) in all those single-camera scenes, that simpleness leads to the audience resenting him more with every passing episode. While he may be the title character, it’s the women who actually command our attention.