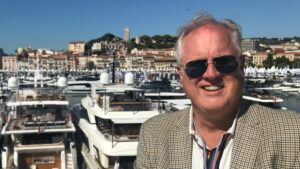 Switching back and forth between the two formats every few days meant ”everybody had to do their job perfectly,“ creator Valerie Armstrong tells TheWrap

AMC describes its new series “Kevin Can F**k Himself,” led by “Schitt’s Creek” alum Annie Murphy, as a dark comedy. That label is fair — but a more accurate description would be an hour-long drama with a multi-camera sitcom, complete with laugh track, shoved in between its dimly lit, single-cam scenes.

While that hybrid might sound jarring, the “Kevin” team made it look natural and seamless when telling the story of Worcester, Massachusetts, resident Allison McRoberts (Murphy), the prototypical “sitcom wife,” who enters a comedy whenever her protagonist husband Kevin (Eric Petersen) is in the room and snaps back into her depressing reality when he exits. But it took a lot of work, and a lot of time, to pull that transition off. After all, they were basically filming two different shows at the same time.

“We shot them separately. We had days of multi-cam shooting where we’d shoot out 25 pages in a day and a half, which is completely different from any other kind of production. And those days felt very different,” “Kevin Can F**k Himself” creator Valerie Armstrong (“Lodge 49,” “SEAL Team”) told TheWrap. “We had people distanced and far away and paid to laugh, ‘laughers,’ on stage who would be there for that. And it’s also like a play. It’s just a completely, completely different setup. Sometimes we would shoot those sitcom scenes and then, a week later, shoot the one that comes directly after it in the same room.”

Murphy’s first four days on set were in “multi-cam world,” with the fifth day being her coming in solo to shoot her first single-cam scenes.

“I walked into the same studio, onto the same set, and all they had done was fly in a fourth wall to make the full room, change the lighting and moved all of the furniture like a little bit closer together. But the environment was completely different. It went from this bright, airy space, a fake feeling space, to this very oppressive, very claustrophobic, very dingy atmosphere that was so helpful for taking on that part of the show. It really helped with the character.”

Armstrong says that switching back and forth between the two formats every few days meant “everybody had to do their job perfectly,” with the most important job of all being that of the script supervisors, Sheila G. Waldron (Episodes 1-4) and Aidan Payne (Episodes 5-8), as they are the people in charge of “Kevin’s” continuity. 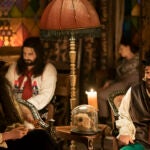 Also Read:
FX Sets Premiere Dates for ‘AHS,’ ‘Impeachment: American Crime Story,’ ‘What We Do in the Shadows’ and More

“In order to sell that format switch as not magical, as not something weird happening, and it’s just the way you see the world, everything else had to be constant,” the executive producer said. “Hair, makeup, set dressing. It all had to stay the same. And so it was a real challenge for everybody who wasn’t me, who just got to point at stuff and say, ‘That’s different.'”

Along with Murphy and Petersen, “Kevin Can F**k Himself” stars Mary Hollis Inboden as Patty O’Connor, Allison’s tough, glass-half-empty neighbor who hides an intelligence and dissatisfaction that bonds her to Allison; Alex Bonifer as Neil O’Connor, the football-loving, beer-swilling, dim-bulb best friend of Kevin; Brian Howe as Pete McRoberts, Kevin’s father with a regressive sense of humor; and Raymond Lee as Sam Park, a clean cut, former Worcesterite who has history with Allison.

The show’s utilization of the multi-cam format is meant to constantly shift focus from Allison and Patty whenever Kevin, Neil or Pete are around, with the stereotypical sitcom setup being Armstrong’s way of emphasizing how suppressed the women feel around the men in their lives, who are considered the “stars” of the show.

Murphy says that in order to stay true to the commentary “Kevin Can F**k Himself” was making about the way these fictional women are stifled by the leading men, she and Inboden weren’t able to get any laughs — or even real lines — while they were all living in multi-cam world.

“When we knew it was sitcom days, we knew that we could have a glass of wine the night before because we didn’t have that much to do to prepare,” Murphy says. “We knew we’d go in the next day and watch the guys be hilarious and maybe have like a line or two and then go on our way. And we were, both of us, on multi-cam days were like, ‘Let us in, coach! Like, can we have a joke today?’ But because the writers so wanted to stick as much as possible to the sitcom format, of course the ladies aren’t going to get jokes, and of course they’re not going to carry the scene. So we were very, very lucky and grateful to have the single-cam world to do our thing in.”

Creating that world for Allison and Patty in the middle of this sitcom prison was an idea that Armstrong first had in 2017, during what she calls her “little feminist fit of rage.”

“I was listening to a podcast where these two women were talking about pilot season,” she said. “These two fantastic women comedians. And they talked about how, still, every year, they go out for the sitcom wife, without fail. And that they are always told by their agents, ‘They’re looking for a really funny woman for this. So it’ll be perfect.’ And then all of their lines are like, ‘What do you mean?’ They’re just setup machines for the men in the room. And I was really annoyed. I was really, really, really annoyed. And I thought, ‘Where’s her show?’ I’d kill to write for those women. I was an assistant at the time. And I was so mad. And I thought, ‘I bet that woman’s really mad too. I bet she’s miserable.'”

That’s when the first image of “Kevin Can F**k Himself” popped into Armstrong’s head.

“A sitcom wife is in her brightly lit living room with her funny husband and a laughing audience. And she goes into the kitchen and you see her completely differently. And it’s not that she’s a different person, it’s that you weren’t looking at her before, you weren’t paying attention. And up close, you see the house is actually a mess and dingy and dark and she’s dingy and dark. And I thought, ‘Yeah, that’s something I want to keep writing.'”

“Kevin Can F**k Himself” premieres Sunday with back-to-back episodes at 9/8c and 10/9c on AMC.