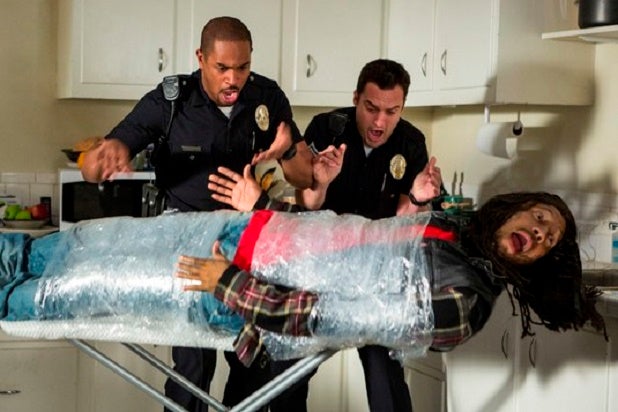 “Let’s Be Cops” apprehended a strong $5.2 million in its first day at the box office on Wednesday, distributor Fox reported Thursday.

The R-rated comedy featuring Damon Wayans Jr. and Jake Johnson as fake cops is getting an early start on the weekend, and its opener was comparable to two other recent raunchy comedies.

Also read: How Much ‘Expendables 3’ Box-Office Booty Will Pirates Take?

Lionsgate’s “Expendables 3” and “The Giver” from the Weinstein Company will open Friday, against reigning champ “Teenage Mutant Ninja Turtles.” Paramount’s reptile reboot is favored to repeat at No. 1 with somewhere north of $30 million for the three days, with the Fox comedy and Stallone’s old-school tough guys providing the main competition.

The Friday figure for “Let’s Be Cops” includes the $1.2 million that it took from 10 p.m. Tuesday screenings. By Friday it will be in 2,936 theaters in the U.S. and Canada.