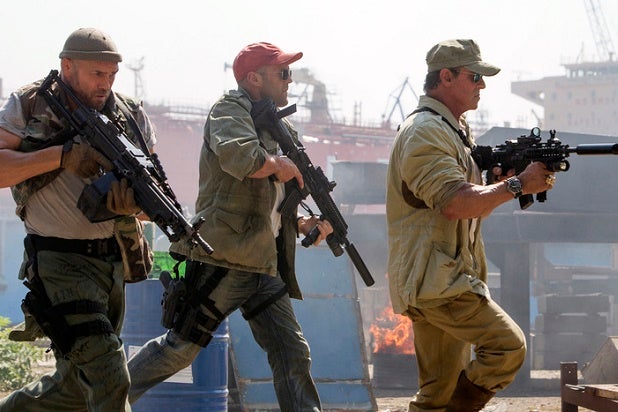 The question hanging over this weekend’s box-office race is how big a hit “The Expendables 3” will take from the leaked copies of the action epic that surfaced on the web two weeks ago.

Reigning champ “Teenage Mutant Ninja Turtles” is the movie to beat. It’s coming off an impressive $65 million opening last weekend and, given the current lack of kid stuff in the market, likely will fetch $30 million for Paramount.

Fox’s R-rated comedy “Let’s Be Cops,” which opened to $1.2 million in limited early shows Tuesday night, looks like the major challenger and should wind up north of $25 million for the three days. The other wide opener, the Weinstein Company’s fantasy adaptation “The Giver,” is aiming for the mid-teen millions.

Sly Stallone’s latest guns-and-geezers epic had been expected to give the half-shell heroes a run for the money, but that was before the leak. Some pre-release tracking has it coming in between $25 million-$28 million — roughly what the second “Expendables” debuted to in 2012 — but that doesn’t take into account the impact of the clandestine copies that were on the net before distributor Lionsgate sued.

Analysts project somewhere between $20 million and $25 million, suggesting a loss of several millions over the opening weekend. It’s only an educated guess, though. Piracy makes major headaches for Hollywood’s studios, but they usually come after a film has been released. In this rare case, the leak came two weeks ago, and “Expendables 3” has been downloaded over 2 million times.

“We’ve been there, and it’s not a good place,” Aronson said, referring to 2009’s “X-Men Origins: Wolverine.” An unfinished version of that film hit the web about a month before it came out. It still brought in $85 million in its first weekend, but Aronson estimated that it cost them about $10 million.

He and “Let’s Be Cops” are in a good place this weekend, particularly after their strong 10 p.m. ET Thursday shows, just a little under those of last year’s “We’re the Millers” and July’s “Tammy,” which opened to nearly $38 million and $33 million, respectively. If the $17 million “Let’s Be Cops” comes anywhere near those numbers, it will be another of this summer’s R-rated comedy success stories.

The “Expendables 3” formula hasn’t changed since the first film featuring Stallone’s over-the-hill gang landed in 2010, and why would it? The first two installments have grossed over $575 million, with the bulk coming from overseas, and that should be the case with this one, too. The aging action heroes’ box-office muscles might have atrophied domestically, but they still pack a punch overseas.

“The Giver” is an adaptation of Lois Lowry’s beloved 1993 young adult novel, “but with a Weinstein Company twist,” said distribution chief Erik Lomis of TWC, which partnered with Walden Media on the fantasy tale, which has a production budget in the mid-$20 million range.

Disney and Marvel’s “Guardians of the Galaxy,” which is up to $188 million domestically and more than $325 million worldwide, will be back for its third week and should help the box office outpace the comparable frame from a year ago for the third straight week. But the season is still more than 15 percent down from last summer, the biggest in history.