Like a victorious Megageek General among his people, "Family Guy" creator Seth MacFarlane’s appearance at Comic-Con on Saturday morning opened to thunderous applause, whoops and cheers — and pretty much remained on the same rapturous level for the next hour, for better and worse.

Hours beforehand, thousands of fans lined up outside the Convention Center to get into Ballroom 20. Joined on the panel by Seth Green and other performers and producers from the critically acclaimed Fox series, MacFarlane promised to give fans a glimpse inside the minds behind the show.

He did not disappoint.

Looking to the future of the decade-old "Family Guy," MacFarlane right off the bat teased the crowd by saying, “We thought it would be the responsible thing to do a "Family Guy abortion episode.” Jokes about Fox declining to air the show, Bea Arthur and the imaginary episode’s possible appearance on a DVD release was like throwing the Christians to the Lions in front of this audience.

The panel Q&A itself was pretty much taken over by the jokestores in the crowd — so much so that had to chide them with a reminder that this “is not an audition.” Except for a few serious questions like “how did you guys came up with the title ‘Family Guy’?”  most of the Q&A was a gagfest unto itself. 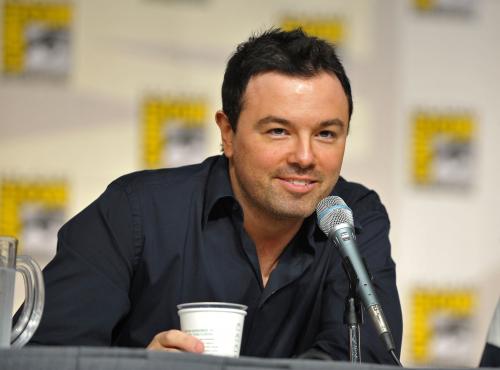 It reached the point — and this was before the guy dressed as Batman got to the microphone — where a deadpan MacFarlane asked the audience if there “is anybody here not stoned?"

After gentle reminders from Comic-Con organizers for the crowd to turn off all recording devices, the action went quickly from the panel on stage to clips from "Family Guy’s" upcoming parody of "The Empire Strikes Back." The show, which will be released, this Christmas, is a sequel to the show’s "Star Wars: Blue Harvest."

Starting off with a slate that read “a long long time ago when the gays weren’t all in your face about it” the parody closely followed the plot of "Empire."

It wasted no opportunity to inject not just the "Family Guy" characters into the blockbuster’s narrative — like little Stewey doesn’t make a perfect pint sized Vadar! — but also to deflated the hot air of George Lucas’ wooden script with asides of cowardice, stumbling sexism and a rather nice winter cost on R2D2.

You didn’t have to be a hardcore "Star Wars" fan to get the gags — but if the mocking of Harrison Ford’s acting resonates at all, it certainly didn’t hurt if you were. A Rodney Dangerfield cameo went over pretty good as well.

As MacFarlane and the others hustled off stage, the Seth Empire then revealed its next expansion, with another panel on the "Family Guy" spin-off, "The Cleveland Show."

MacFarlane returned a few moments later, joined by actors Jamie Kennedy and Kevin Michael Richardson, and producer Mike Henry, among others, from the new show. "The Cleveland Show," which you could call "The Jeffersons" to "Family Guy’s" "All in the Family," was previewed online last month and debuts on air this fall.

As a clip from the pilot and a future episode to be broadcast this December on Fox came up on the giant video screens, it seemed obvious that MacFarlane’s fan base are going to be traveling from one show to another with him — which means his Midas touch is full of sex jokes, social commentary and steady as a hit.