Meghan McCain is leaving ABC’s “The View” after four seasons, she announced Thursday.

“I’m just going to rip the band-aid off. I am here to tell all of you, my wonderful co-hosts, and the viewers at home that this is going to be my last season here at ‘The View.'”

“I will be here through the end of July to finish out the season with all of you, which I am grateful for,” she continued. “This was not an easy decision. It took a lot of thought and counsel and prayer and talking to my family and my close friends.”

A report surfaced in the Daily Mail earlier in the day that said she would be leaving, but co-hosts like Whoopi Goldberg and Joy Behar weren’t told in advance. McCain did not immediately confirm the reports but did remove a reference to her role on the panel show from her Twitter bio.

A representative for ABC did not immediately return a request for comment or confirmation. 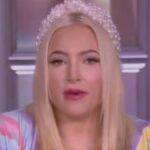 McCain offers conservative opinions on the panel, which typically features more liberal women like Goldberg and Behar. She’s gotten into on-air fights with them repeatedly but she and Behar have had a particularly tumultuous on-air relationship.

Sometimes, these fights have been so significant that McCain or one of her co-hosts has to address them later. In 2019, after a contentious moment between McCain and Goldberg, Goldberg told viewers, “Things get heated on this show. If you watch the show, you know this has happened over the years. We’re really passionate … Sometimes, we’re not as polite as could be.”

She compared the panelists on the ABC talk show to the viewers’ own families, saying the same kind of disagreements happen around family tables, too, and no viewer could possibly deny it, so they should “calm down.”