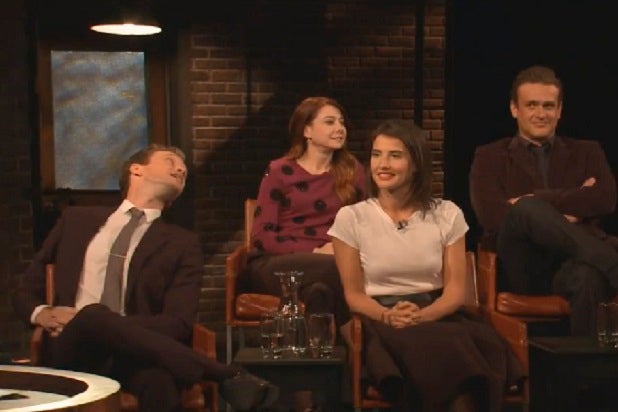 Neil Patrick Harris, Jason Segel and the rest of the “How I Met Your Mother” crew will say goodbye to their popular CBS sitcom soon — but not before dropping in on James Lipton for an episode of “Inside the Actors Studio.”

The cast will appear on the Bravo series March 27 at 8 p.m., just a few days before the “Mother” March 31 series finale.

See video: ‘How I Met Your Mother’ Cast Delivers Finale-Themed Top 10 on Letterman: ‘We’re All Naked’

During the episode, the cast will discuss their favorite scenes, and two of the cast members get a little more tight-knit than usual by locking lips. (Sorry; Bravo didn’t name names.)

“I’ve always loved [that] it’s not a cynical show,” Josh Radnor — who plays mother-meeter Ted Mosby on the series — notes during the episode. “It’s a show that lets people love each other, and express that love. The whole point of the show is about love and the search for love … and it’s also about family … a kind of modern family.”

Watch a preview of the “How I Met Your Mother” episode of “Inside the Actors Studio” below.