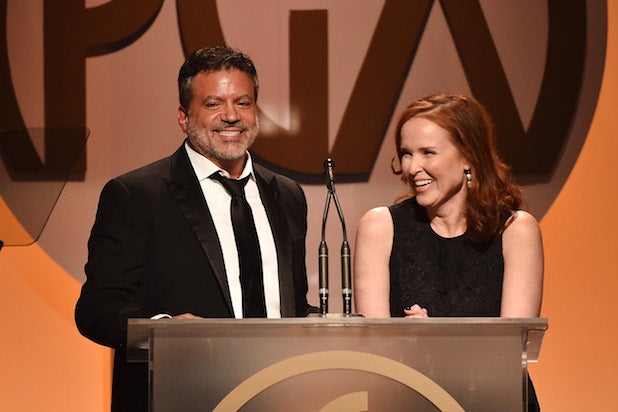 Michael De Luca and Jennifer Todd will produce the 89th Academy Awards, the Academy of Motion Picture Arts and Sciences confirmed on Friday.

News that the two were in negotiations to take the job originally surfaced on Thursday night.

De Luca has produced the “Fifty Shades of Grey” films and the Oscar Best Picture nominees “The Social Network,” “Moneyball” and “Captain Phillips,” and worked as an executive at Sony Pictures, DreamWorks and New Line.

Todd worked at New Line with DeLuca, and has produced “Memento,” “Alice in Wonderland” and the “Austin Powers” films. She is the president of Ben Affleck and Matt Damon’s production company, Pearl Street Films.

In recent years, De Luca and Todd have frequently served as co-chairs of the Producers Guild Awards, one of the most reliable predictors of Academy Awards success.

Todd will become only the third woman to produce the Oscars, after the late Laura Ziskin, who performed the duties in 2002 and 2007, and Lili Zanuck, who did it with her husband Richard in 2000.

“We are thrilled to be working with Mike and Jennifer,” said Academy CEO Dawn Hudson in an AMPAS statement. “In our meetings, they shared an early vision for the show that is inspired and in keeping with the films they’ve produced: entertaining, unexpected and of the highest caliber.”

In the same statement, De Luca and Todd commented, “We are deeply honored to produce the Academy Awards. We both revere the Oscars and grew up watching them each year with our families.  We are so humbled and grateful to be a part of this incredible legacy, and look forward to creating an exciting show that celebrates movies and the power they have to connect us all.”

The hiring ends a long wait and a feverish Hollywood guessing game. With the 89th Academy Awards taking place on February 26, 2017, about four months from now, this is the latest the Academy has named an Oscar producer since Gil Cates was announced in mid-November in 2006.

(In 2011, Brian Grazer was named to co-produce the show on November 8, but his was an emergency hiring to replace Brett Ratner, who had resigned suddenly. Ratner’s co-producer, Don Mischer, had been hired in August and remained in place.)

Also Read: ABC to Keep Oscars Through 2028 Under AMPAS Extension

While some recent press reports painted the failure to have a producer in place as a crisis of sorts for the Academy, AMPAS president Cheryl Boone Isaacs shrugged off the criticism, telling TheWrap in late September that the doomsayers were “silly” and that she would make the hire in plenty of time.

De Luca, Todd and the Academy are now under immediate pressure to secure a host for the show, which will likely be their first high-profile decision.

De Luca and Todd succeed David Hill and Reginald Hudlin, who were put together by the Academy to produce last February’s show. Their broadcast drew mostly favorable reviews, though it faced criticism for focusing so relentlessly on the #OscarsSoWhite controversy.

Craig Zadan and Neil Meron produced the Oscars in 2012, 2013 and 2014, on a three-year contract that the Academy chose not to reveal until it ended. Their shows received drastically mixed reviews, with the 2013 Ellen DeGeneres-hosted show by far the most favorably received of the trio.

De Luca and Todd’s hiring marks the ninth consecutive years that the Oscars have been produced by a team of two, rather than the single producer that was before 2009.

The late Gil Cates holds the record for Academy Awards shows, producing 14 of them between 1990 and 2008.

Producing the Oscars can be a thankless task, with no show ever drawing unanimously positive reviews, and ratings far more dependent on the films that are nominated than on anything the producer can do.

The producer is also limited in what he or she can do by the Academy and its Board of Governors, which must approve any significant changes to the format. The board, which is dominated by members from below-the-line branches, has long resisted calls to eliminate any of the 24 awards or move them off the prime-time telecast.

In addition, ABC, which broadcasts the Academy Awards on a long-term contract that was recently extended, has also been adamant about assuming more control over the production, which does not reach nearly the ratings it used to draw.

While the producers have to assemble a production team, the world of live event television contains a number of specialists, from directors to talent executives to art directors to lighting designers to cameramen, assistant directors and stage managers, who go from show to show and can be assembled quickly.

Other shows like the Emmys have routinely named producers this late or later in their own production schedule, though Oscar ratings typically dwarf those of most other awards shows.

NOTE: This story has been updated to reflect the Academy’s confirmation of De Luca and Todd’s hiring.