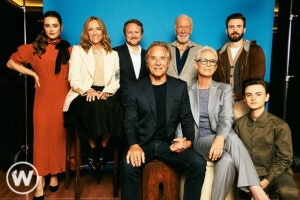 Tim Heidecker is a master of playing entitled, inept, quick-to-anger men. His character in the film “Mister America” — with whom he shares the name “Tim Heidecker” and hopefully zero character traits — has such a sense of entitlement that he isn’t satisfied even after getting away with multiple murders.

“Mister America” is a fake documentary that begins soon after his character has beaten the odds and avoided life in prison. Rather than enjoy his freedom, he decides to run against the “rat” district attorney who tried to prosecute him for the 19 deaths he clearly caused at an EDM festival in Southern California’s San Bernardino County.

Heidecker’s “Mister America” alter ego has so much in common with another entitled, inept, quick-to-anger politician that Heidecker doesn’t point out the parallels, abiding instead by the old comedy rule, “you don’t put a hat on a hat.”

His alter ego is known for his rudeness.Heidecker first adopted the persona eight years ago for Adult Swim’s “On Cinema,” which pairs him with a purported cinephile played by Gregg Turkington, the master of commitment behind shambolic standup comedian Neil Hamburger. “Gregg only wants to talk about movies, I only want to talk about myself,” he explained.