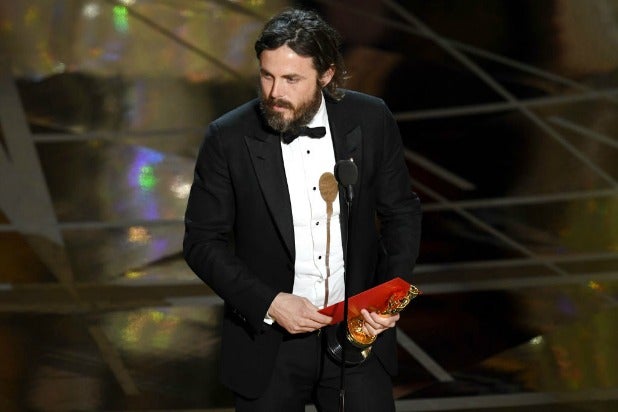 Though not on the level of giving Best Picture to the wrong movie as happened in 2017, the Oscars made a topical error Sunday by sending out its transcript of Casey Affleck’s Best Actor acceptance speech from 2017 instead of Sam Rockwell’s Best Supporting Actor speech from this year.

During the ceremony, the Academy provides transcripts of each award winner’s acceptance speech to the media, sending out email notifications whenever a transcript is posted on the Academy website. Strangely, the text of the email — which was the first transcript email of the night, listed the correct URL, but when the hyperlink connected instead to Affleck’s speech.

The Academy corrected the error after 13 minutes.

It would have been a rather inconsequential hiccup were it not for the #MeToo and #TIMESUP movements taking center stage throughout the 2018 awards season, with women and men speaking up about sexual abuse by powerful Hollywood men. Affleck has been accused of sexual harassment in the past and settled with a pair of women, Amanda White and Magdalena Gorka, who sued him over instances of “uninvited and unwelcome sexual advances” during the filming of “I’m Still Here.”

Affleck settled with the two women, and denied any wrongdoing.

That history became a big topic of conversation during Affleck’s Oscar campaign a year ago, and with #MeToo and #TIMESUP being so prominent this year Affleck opted to skip the traditional slot of the previous year’s Best Actor winner presenting this year’s Best Actress award — in fact, Affleck did not attend the ceremony at all. When Affleck’s made his decision in January, an Academy rep told TheWrap that the organization appreciates “the decision to keep the focus on the show and on the great work of this year.”

With the Academy seemingly happy to try to avoid the very topic of Casey Affleck during this year’s Oscars, the link mixup certainly has prevented that from happening.