NBC has iced out the Hollywood Reporter from its upfronts presentation and executive interviews after James Hibberd, the trade’s TV editor, crashed a video rehearsal and reported details of the network’s lineup hours before the official release.

The network has gone into radio-silence mode with the Reporter since Hibberd’s post on Sunday, which included quotes from presenters in the video, to be shown Monday as part of NBC’s pitch to advertisers.

Hibberd also taunted the network brass for the scoop, writing, "Having an upfront at the [New York] Hilton, as opposed to a fancy theater … makes it easier for a reporter to crash your upfront’s tech rehearsal." 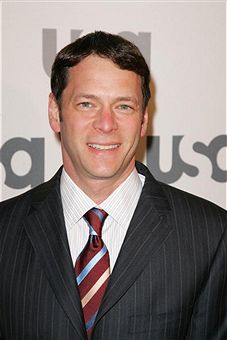 Those interviews were to take place prior to the general phone conference announcing the schedule. The network also rescinded Hibberd’s ticket to the official live upfront presentation on Monday at the Hilton at 11 a.m.

Reached by TheWrap, Hibberd said he was unable to comment.

It’s understandable that NBC would be a little … sensitive about all this. The network has had trouble maintaining control of its own message this year, beginning with the Conan O’Brien/Jay Leno mess, and continuing on Thursday, when it was revealed that "Law & Order" was being canceled — even as talks were (allegedly) still under way with producer Dick Wolf.

Now, just as the peacock seemed to be getting off the mat and was ready to trumpet its all-new lineup — poof! — its thunder was stolen, right down to quotes from their presentation reel by Alec Baldwin, Tina Fey, Gaspin and Bromstad, as reported by Hibberd.

And it’s not the first time NBC and the Hollywood Reporter have clashed. About a year ago, the trade ran a story from the NBC shareholders meeting and pointed out criticism of the network from the question and answer session. For some time thereafter, NBC stopped dealing with Reporter writers.

Clearly that rift was patched up — until now.