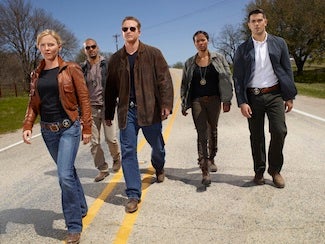 NBC is clearly sparing no expense in cleaning up the Jay Leno mess.
The peacock is adding seven new dramas, five new comedies and one new alternative show to the schedule next season, according to the network’s lineup, released Sunday.
That includes four new shows — "Chase" (pictured left), "Law & Order: Los Angeles," "Love Bites" and "Outlaw" — slotted for the highly important 10 p.m. hour, where Leno ran nightly from September until March, when an affiliate uprising over poor ratings led to the most publicized TV switcheroo in recent memory.
The 10 p.m. hour is key to the affiliates because it leads into their 11 p.m. local newscasts, the biggest money-makers for those stations. It’s also an important hour for the networks because 10 p.m. shows usually get higher viewership, meaning higher advertising rates.
While putting so many freshman shows on in such a key time period is a gamble, NBC didn’t have much of a choice. 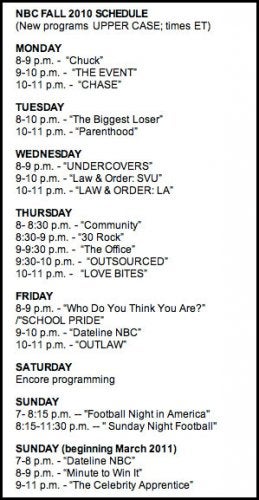 "I don’t think it’s a matter of risk, it’s a matter of necessity," Steven Sternberg, former head of research at media agency negotiating unit Magna, told The Wrap. "NBC has nothing except ‘Law & Order: SVU’ returning that would be appropriate for the 10 p.m. timeslot. Inserting reality shows at 10 would not help them long-term. They need to establish some scripted series success. In the past five years the only two new dramas NBC has added that were even moderate successes were ‘Heroes’ and ‘Parenthood.’"
Speaking of those two shows, "Heroes" ran its course and was not picked up for renewal, while "Parenthood," which came on the air in March to replace Leno in one of the 10 p.m. slots, will return in that same time period as this season on Tuesday night.
Billie Gold, director of programming at media buying agency Carat, recalled that NBC "two seasons ago  launched three new dramas in the 10 p.m. hour, ‘My Own Worst Enemy,’ ‘Lipstick Jungle’ and ‘Life,’ all of which pulled in mediocre ratings at best."
But Jeff Gaspin, chairman, NBC Universal Television Entertainment, told The Wrap that the network "spent more money on development, shot more pilots and picked up more shows for the Fall and midseason than we did last year, and we feel like we have the goods this year."
Gaspin said the four new 10 p.m. shows have best chance to succeed.
He said plans call for giving the Monday 10 p.m. drama "Chase" major promotional time on NBC’s Sunday football telecasts. "Parenthood" returns on Tuesday at 10 and this season has been winning the 18-49 demo in its time period.
Leading out of veteran "Law & Order: SVU," the freshman "Law & Order: Los Angeles" has a natural lead-in, and new Thursday comedy "Love Bites" leads out of four half-hour sitcoms.
Gaspin also said  NBC wants to air more first-run episodes and less repeats, which will run primarily on Saturday nights. And he indicated that some of the mid-season shows will be put on during weeknights to replace shows in repeat.
In announcing its new schedule, NBC clearly indicated it is counting on "innovative hit-makers like J.J. Abrams, Jerry Bruckheimer and David E. Kelley, among others" to come up with some new successes for a network where breakout hits over the past several years have been few and far between.
Gaspin said the network is hoping that casting Jimmy Smits (right) in "Outlaw," about a playboy U.S. Supreme 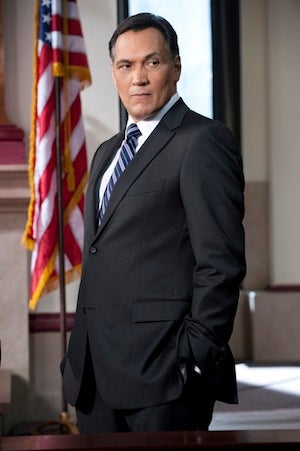 Court Justice who abruptly quits the court to return to private practice, will draw viewers back to watching TV on Friday nights. CBS had a successful run with its drama "Numb3rs" at 10 p.m. Fridays, but "Miami Medical," which replaced it late this season, has struggled.
NBC chose to keep the ratings-challenged cult hit "Chuck" on the schedule, pretty much because it has an avid core audience, albeit small — and it will lead off a Monday night action, adventure block at 8, followed by new dramas "The Event" at 9 and "Chase" at 10.
"The Event" is a suspense thriller starring Jason Ritter as a common guy who gets immersed in a series of conspiracies, including an assassination attempt on the President. "Chase" is a Bruckheimer-produced action series based on a real-life group of marshalls tracing down fugitives.
NBC’s Tuesday night has a two-hour reality show veteran "Biggest Loser," leading into "Parenthood" at 10.
The new drama "Undercovers," about a retired husband and wife team who return to the CIA, opens NBC’s Wednesday night at 8. It is executive produced by Abrams and stars Boris Kodjoe and Gugu Mbatha-Raw. That leads into returning "Law & Order: SVU," which leads into the 10 p.m. freshman drama "Law & Order: Los Angeles," both from Dick Wolf, who saw NBC cancel his long-running original "Law & Order" last week.
Thursday remains a comedy night with returning sitcoms "Community" at 8, "30 Rock" at 8:30, "The Office" at 9 and newcomer "Outsourced" at 9:30.
The latter is about a Kansas City customer service manager who has his department outsourced to India — where he moves to — and stars Ben Rappaport. On Thursday at 10 is another freshman show, "Love Bites," a romantic comedy.
For Friday at 8, NBC has scheduled new reality show "School Pride," followed by veteran news magazine "Dateline" at 9 and the Smits drama "Outlaw" at 10.
Saturday night is repeat night, and Sunday will begin at 7 with the "Football Night in America" pre-game show, followed by "Sunday Night Football."
Mid-season shows include dramedy "The Cape," about a former cop who loses his job and then turns himself into a masked super hero; law drama "Harry’s Law"; sitcoms "Friends with Benefits" and "Perfect Couples" and "The Paul Reiser Show."
Also back after "Sunday Night Football" in January will be "The Apprentice" on Sunday nights. And NBC will also bring back "The Marriage Ref," currently airing in one of the replacement Leno spots at 10, for midseason next year, along with a new reality show "America’s Next Great Restaurant," starring Bobby Flay.
During the NBC media conference call following the announcement, network executives addressed the following:
* Angela Bromstad, president, primetime entertainment, NBC and Universal Media Studios, said the original "Law & Order" was not renewed because the network was looking to "reinvent" the series and the brand. She said it hasn’t been decided whether the new "Law & Order: Los Angeles" will feature any characters or tie-ins from the original series. And she added that NBC is talking with show creator Dick Wolf about doing something special to end the series. "We talking to Dick about how to give it a proper send off with a movie or special episode."
* Bromstad said also being discussed is a special movie event for cancelled series "Heroes" for next season.
* Gaspin said sitcom "Parks & Recreation," replaced on Thursday nights this Fall by new sitcom "Outsourced," "will be back on the schedule at some point this season." Gaspin added that the other sitcoms that NBC has ordered for mid-season will be worked into the Thursday night block, possibly a few at a time, to see how they do with viewers there, or whether there is a possibility of breaking them out somewhere else on the schedule.
* Bromstad said "Law & Order: Criminal Intent" will continue to be televised in first-run episodes on NBCU-owned USA Network, and it is not likely to return to NBC.
* Commenting on why ratings-challenged "Chuck" returned, in addition to fitting in well in the Monday night adventure block, Bromstad said the network had so many holes to fill, that there needed to be some shows brought back for continuity.
* The much talked about revival of "The Rockford Files" from Universal Media Studios is not dead, although it was scrapped for fall. NBC execs were not happy with the pilot, but the studio is attempting to rework it. "We want to get it right," said Gaspin.