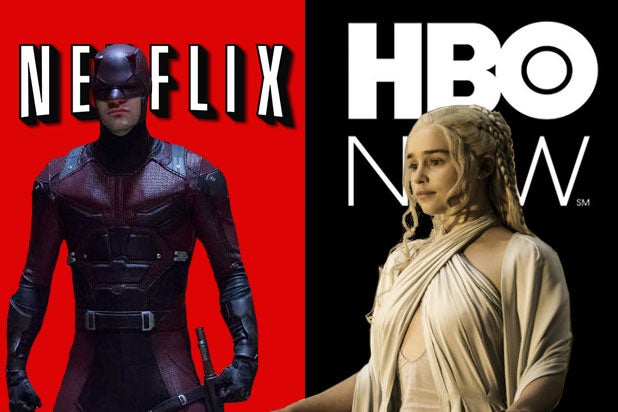 Netflix is raking in the money thanks to continued subscriber growth, but the streaming company surely isn’t stopping at that sole revenue stream — no matter how high it’s predicted to rise.

The Reed Hastings-run company, which saw its stock skyrocket $87 per share one day after releasing strong Q1 earnings and reporting subscriptions above 62 million, is currently making a key switch to emulate HBO — timed ironically as the premium cable giant is adapting to be more like Netflix with its HBO Now option for cord cutters.

Peter Csathy, CEO of Manatt Digital Media, told TheWrap that Netflix’s long-standing “HBO fixation” has led directly to its latest move, with which it hopes to evolve from simply licensing its original programming to actually owning the content outright.

“It’s been extremely lucrative for HBO,” Csathy explained of the premium TV model. “It makes sense for [Netflix] — and it’s always better to own all the rights, so that you can then decide what to do with them.”

Both Netflix and HBO declined comment for this story.

While Wall Street and investors were thrilled by Netflix’s strong mid-April earnings announcement, a call for diversification has begun from both within and outside the company.

“I think Netflix has to show to the Street that it is more than a one-trick pony when it comes to monetizing,” Csathy told TheWrap.

So the race is on for Netflix to “out-HBO HBO” — as Csathy put it — before HBO successfully out-Netflixes Netflix. HBO Now is testing those waters, while the “House of Cards” home explores a secondary revenue stream ripped from the “Game of Thrones” channel’s strategy.

That new ownership concept has yet to fully form at Netflix — new shows “Bloodline” and “Daredevil” are both licensed — but Csathy speculates that the company will re-open conversations with those it currently licenses originals from in hopes of potentially gaining ownership over proven properties.

That, of course, would cost a pretty penny. All of this will. Investors can expect operating expenses to rise in the short term, with returns on those investments not being realized as immediately. But the theory is that they will come, hitting a variety of sweet spots on the company’s financial statements.

“The run rate for that has been under 1.5 times for half a decade,” Odeluga continued. “Anything that lowers the cost of capital — a higher ratio implies better credit worthiness — would be advantageous for a company whose reliance on debt finance is heavy.”

So, obviously, like most big corporate maneuvers, there is the possibility of good and bad results. Another potential con to Netflix’s new strategy is one that can be applied across basically any business — this one isn’t quantitative though.

As Csathy says: “The more you try to take on, the more difficult it is to focus.”

Plus, there’s the matter of turning current collaborators into competitors. That might be rough at first.

“There could be medium-term snags from being both a client of and a de facto competitor against current content licensors like Media Rights Capital,” Odeluga said.

And that’s not the only issue for the interim, he noted: “Shareholders might suspect ownership of content is a step too far, with insufficient evidence of risk/return balance to justify the added expenditure.”

Right now, Netflix is focused on keeping those shareholders happy without alienating consumers. That means: continue to make a lot of money for the former group, preferably without taking it directly from the latter. For now, at least.

Avenues to additional revenue for Netflix could involve raising subscription prices, shoehorning in sponsorships and advertising, and potentially even selling subscriber data, but the first option didn’t go over so well the last time. When the streaming company raised its rate for new members from $7.99 to $8.99 per month, social media lost its mind.

That said, if increasing user rates by a buck created a vociferous backlash, the privacy concerns that would invariably be raised by that final option make it the least likely.

For Netflix, originals aren’t just critical darlings (in many cases), they’re customer acquisition and retention tools. In an increasingly crowded marketplace, total control over those instruments is seen as of the utmost importance.

While Amazon can use its own original programming as a loss leader, merely a tool to pull buyers in to the giant retail site, and the coming Apple offering is mostly a clever marketing plan for the tech company’s products, Netflix only had subscriptions to sell until recently.

“That’s a lot of pressure on Netflix … it’s an all-out battle royale,” Csathy said of the landscape, adding: “It’s a great time to be a content creator.”