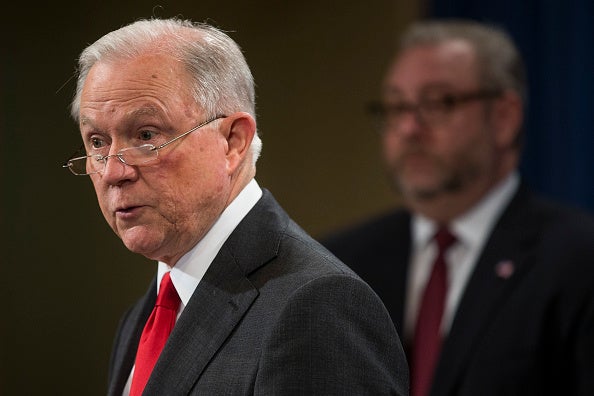 A Sunday editorial in the Daily Northwestern apologized for a variety of coverage elements around former attorney general Jeff Sessions speaking on campus Nov. 5, from contributing “to the harm students experienced” to “retraumatizing” protesters who saw their photos posted to reporters’ Twitter accounts. The photos, the editorial says, have now been taken down.

However, the newspaper is now being criticized for the move and has been accused of back-peddling on coverage of the event.

“This is called reporting,” says one incredulous tweet from the Washington Post’s Amy Brittain, who read the coverage apology from Northwestern University’s student newspaper. “Why are you apologizing for it?”

The editorial also addressed newspaper staffers using the university directory to contact students ahead of the speech to possibly set up on-site interviews. That, according to the editorial, was “an invasion of privacy.”

“There’s a lot to comment on in this Daily Northwestern editorial, but apologizing for contacting people to ask if they’re willing to be interviewed? Regretting that you photographed protesters protesting in public?” asked the Chicago Tribune’s Gregory Pratt.

“The student newspaper at Northwestern, home to one of the most prestigious journalism schools in the country, has issued a groveling apology for…doing journalism, during & after Jeff Sessions’ speech on campus,” Guy Benson, political editor at Townhall.com, tweeted. “As a proud alum, I’m embarrassed by this.”

Others defended the students, saying they were learning and the criticism of the paper was too harsh.

“Everyone tweeting about that bad Daily Northwestern editorial should also have to tweet out their biggest mistake as a college journalist,” wrote Huffington Post’s Ryan Reilly.

Editors for the Daily Northwestern did not immediately return a request for comment, but Medill school dean Charles Whitaker issued a statement.

“But let me be perfectly clear, the coverage by The Daily Northwestern of the protests stemming from the recent appearance on campus by former Attorney General Jeff Sessions was in no way beyond the bounds of fair, responsible journalism. The Daily Northwestern is an independent, student-run publication. As the dean of Medill, where many of these young journalists are trained, I am deeply troubled by the vicious bullying and badgering that the students responsible for that coverage have endured for the ‘sin’ of doing journalism,” he said.