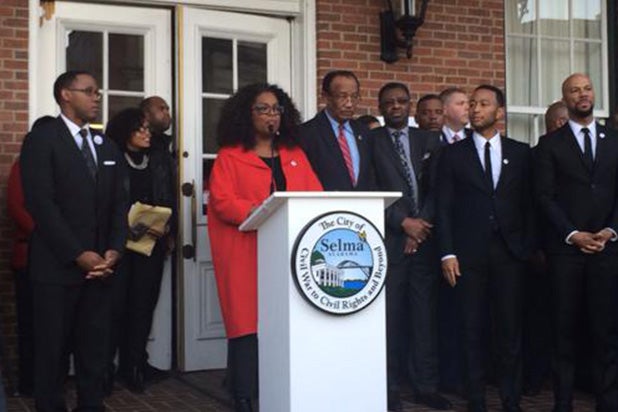 Oprah Winfrey and the team behind the film “Selma” took their star power to Alabama Sunday to honor Martin Luther King Jr.

Winfrey, the film’s director Ava DuVernay, its castmembers David Oyelowo and Common, and the producers behind the movie joined local residents in the city of Selma for a massive march.

Local television station WSFA tweeted a photo as the gathering got underway that showed Winfrey, city officials and musicians John Legend and Common, who wrote and performed the film’s Oscar-nominated song “Glory.”

DuVernay tweeted: “Such a joy, a privilege, an honor to be in the city of Selma today with my parents, my siblings and my #SelmaFilm family. Onward!”

The hours-long event, ahead of MLK Day, started around 4:30 p.m. CT with a Q&A with the cast and filmmakers at Selma High School. After that, Selma mayor George Evans was to join the “Selma” team in a march across the iconic Edmund Pettus Bridge.

“I’m honored that Paramount Pictures and the cast has put ‘Selma’ to the forefront of the nation again during MLK weekend. The dream marches on,” Evans said in a statement released Friday by Paramount Pictures, distributor of the film.

Oprah greeted the crowd as only she can, screaming SELMA!!!! Which of course the crowd responded back! pic.twitter.com/X8tXv8zm0u

The critically acclaimed drama focuses on the 1965 Selma-to-Montgomery marches demanding voting rights for blacks. Some of the marches were led by the iconic civil rights leader, played in the movie by David Oyelowo.

Winfrey is a producer on the film and portrays civil rights activist Annie Lee Cooper.

The march came on the heels of Thursday’s Oscar nominations which saw the film receive nods for Best Picture and Best Original Song. However, Oyelowo and DuVernay did not receive Oscar nods, raising eyebrows among critics of the Academy, including director Spike Lee.

“That doesn’t diminish the film,” Lee told The Daily Beast. “Nobody’s talking about motherfuckin’ ‘Driving Miss Daisy.’ That film is not being taught in film schools all across the world like ‘Do the Right Thing’ is. Nobody’s discussing Driving Miss Motherfuckin’ Daisy. So if I saw Ava today I’d say, ‘You know what? Fuck ’em. You made a very good film, so feel good about that and start working on the next one.”

At one time considered a top contender heading into awards season, “Selma” has had a rough run recently, and controversy surrounding the film may have hurt its chances with Oscar voters. Historians put the filmmakers on the defensive after questions about its accuracy surfaced regarding the relationship between King and President Lyndon B. Johnson.

Despite the controversy, President Obama screened the film at the White House Friday and was joined by the cast and crew.