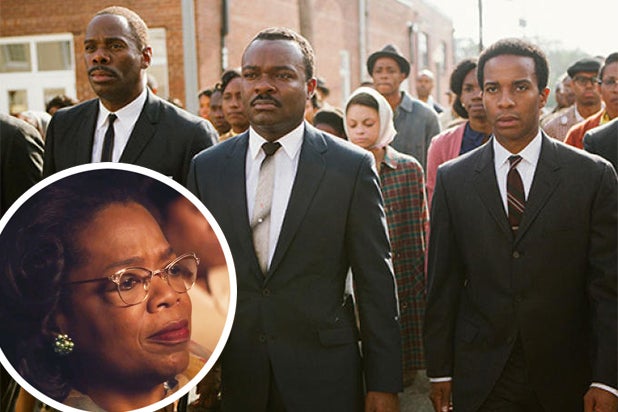 On the heels of Thursday’s Oscar nomination for Best Picture, the filmmakers and cast of “Selma” will invite residents of the Alabama town to march on Sunday to commemorate Martin Luther King, Jr. Day.

Director Ava DuVernay, stars David Oyelowo and Common and producers Winfrey, Dede Gardner and Jeremy Kleiner will be among those paying homage to the slain civil rights leader at the event on Jan. 18, Paramount Pictures announced in a statement on Friday.

The day-long event will open with a Q&A with the cast and filmmakers moderated by Congresswoman Terri Sewell at Selma High School, then, following an address by Selma mayor George Evans and a prayer, the group will begin the march across the Edmund Pettus Bridge at 4:45 p.m.

“I’m honored that Paramount Pictures and the cast has put Selma to the forefront of the nation again during MLK weekend. The dream marches on,” said Mayor Evans in Paramount’s statement.

The day will culminate with a special screening of the Oscar-nominated film at the Selma Walton Theater for Alabama state officials and the film’s local cast and crew. On Monday, which is the annual Martin Luther King, Jr. holiday, there will be two free screenings of “Selma” at the movie theater at 12.30 p.m. and 3 p.m., with screenings to continue throughout January.

As TheWrap previously reported, 275,000 middle and high school students across the country will also be able to see the historic drama for free at 12 locations nationwide.

“Selma” focuses on Dr. King’s efforts to organize a march in the titular Alabama city which he hoped would help bring equal voting rights to Americans of all colors. It chronicles a tumultuous three-month period in 1965, when Dr. King led a dangerous campaign in the face of violent opposition. The epic march from Selma to Montgomery culminated with President Johnson (played by Tom Wilkinson) signing the Voting Rights Act of 1965, one of the most significant victories for the civil rights movement.

The acclaimed film was nominated for two Oscars on Thursday morning, Best Picture and Best Original Song (“Glory” by John Legend and Common), however, neither Oyelowo nor his on-screen wife, Carmen Ejogo, received an acting nod. The shutout sparked intense debate in Hollywood and across the entertainment industry regarding the lack of diversity at the Academy Awards.