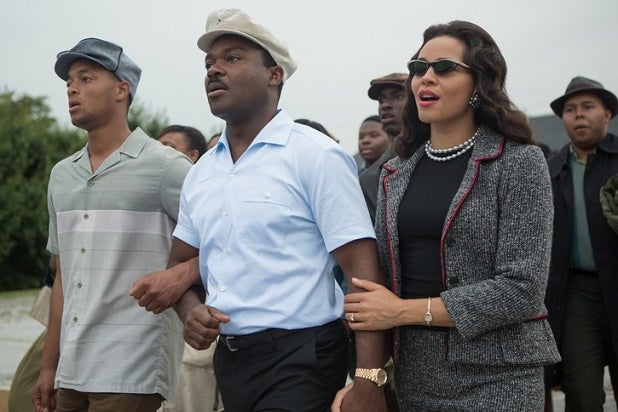 Let’s tell it straight – the Motion Picture Academy snubbed “Selma” on Thursday morning, one of the movies this season that seemed to have passion, momentum and the weight of history on its side.

Yes, I know the film won a Best Picture nomination. But it was snubbed in the writing, directing and acting categories. That’s a surprise.

Certainly “Selma” is not a perfect film. But few could argue with David Oyelowo’s stirring performance as Martin Luther King, Jr. And the screenplay – particularly Ava DuVernay’s powerful writing in the absence of the right to use King’s actual speeches – was especially worthy.

The Academy missed a chance to nominate an African-American woman director – which would have been a first.  Instead it seems “American Sniper” won the attention that “Selma” might have ( Bradley Cooper of “American Sniper” probably took Oyelowo’s slot in the Best Actor category),  a film that has done well at the box office but that has hardly ignited great passion among audiences or united the critics behind it.

Clint Eastwood has justifiably won many, many awards, but this is also true: he is part of the Hollywood club. Ava DuVernay is not.

It is hard to ignore that “Selma” comes in a year when crowds of angry young people of all colors and races are filling the streets of America demanding a more equal society, fair treatment by police and an end to random shootings of young black men.

“Selma” was particularly compelling as a contender because it was the first feature length film about Martin Luther King, Jr., a surprising oversight in the past three decades, and because in screening after screening, audiences were moved to tears and intense discussion with the blindingly articular director Ava DuVernay and her cast.

The Academy, apparently, wasn’t entirely convinced, and neither were the Hollywood guilds, which one after the other failed to nominate the film.

All that said, this does look sorta ridiculous. pic.twitter.com/7fhGWvn2mv

So why the snub in a year after “12 Years a Slave” made it all the way to win Best Picture?

It could not have helped that Paramount never got the screeners to the voters. That is a snafu that will be discussed internally for some time.

It’s also worth considering that the Academy is made up almost entirely of elderly white men, as are this year’s acting, directing and screenwriting nominees.

I cannot really argue with the Academy’s choices in the Best Director category – Bennett Miller, Richard Linklater, Alejandro Gonzalez Inarritu, Wes Anderson and Norwegian filmmaker Morten Tyldum  – even though they are all white guys. They are all deserving.

How popular has the film been with the public?

“Selma” was soft in its nationwide debut last weekend, but is positioned to capitalize at the box office over the long Martin Luther King Day weekend. It’s taken in $15.5 million since its limited opening on Christmas Day and, with the boost a Best Picture nomination typical provides, should finish with a domestic total in the very-respectable $75 million range.

There’s this cold comfort, as our Awards Editor Steve Pond writes this morning: “Now “Selma” can stand with “The Tree of Life,” “Amour” and “Extremely Loud & Incredibly Close” as only the fourth movie to be nominated for Best Picture after failing to gain any nominations from the Producers Guild, Writers Guild (for which it was ineligible), Directors Guild and Screen Actors Guild.

The Academy is Hollywood’s own club within the club. And as we know, diversity is a total stranger in its membership halls. We’re talking 90-something percent white. That can only change when the industry itself changes – opens its arms to the diversity of experience, art, culture and voices of what America has become.