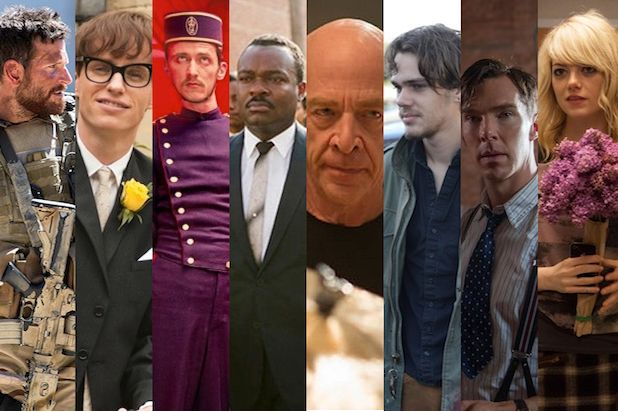 History could be made at Sunday’s Academy Awards. It may all rest in the hands of Graham Moore, the screenwriter for “The Imitation Game.”

Or, rather, it may rest in the hands of voters in the Best Adapted Screenplay category, where Moore is considered a very slim frontrunner in a race against rivals that include “The Theory of Everything,” “American Sniper” and most formidably “Whiplash.”

If Moore wins, this could be the first Oscars ever in which every Best Picture nominee in a field of more than five goes home with an Academy Award.

It hasn’t happened in the five years since the Academy expanded the category from five to 10 nominees; the closest was 2013, when “Beasts of the Southern Wild” was the only one of the nine nominees not to collect hardware on Oscar night.

And it never happened between 1931 and 1943, when the Best Picture category ranged from eight to 12 nominees.

Adapted Screenplay is considered the best shot at a win for “The Imitation Game” on Sunday, though its eight nominations give it quite a few other chances as well.

And the other seven nominees all have categories in which they are considered favorites.

“American Sniper,” a dark-horse contender for picture, is a frontrunner in Sound Editing and maybe Sound Mixing as well.

“The Grand Budapest Hotel” could easily go home as the night’s biggest winner, picking up victories in Production Design, Costume Design, Makeup and Original Score, among others.

“Selma” will likely win Best Original Song, the only category besides Best Picture in which it is nominated.

“The Theory of Everything” has a Best Actor favorite in Eddie Redmayne — and even if he loses to Michael Keaton — also a strong shot in Best Original Score.

And “Whiplash” is sure to see J.K. Simmons win Supporting Actor, with another trophy or two (Sound Mixing? Adapted Screenplay?) a distinct possibility.

So barring upsets, if “Imitation Game” can bring home the gold in one of its categories, we’ll be seeing something new on Sunday night.

And by the way, an Oscars at which every Best Picture nominee wins at least one award wasn’t even common in the days of only five nominees. In the 20 years before the category was expanded, each of the five nominees went home with an Oscar only five times.