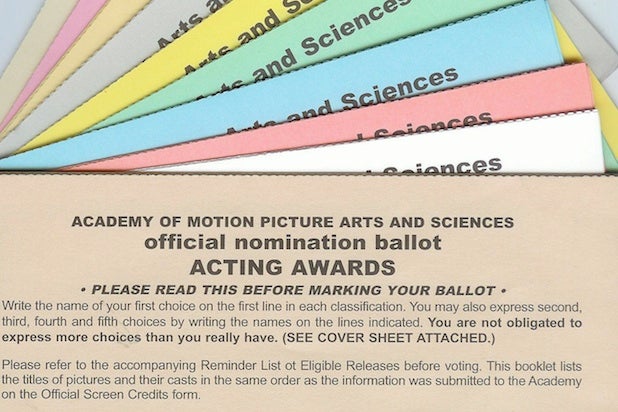 Oscar nomination voting begins next Monday, kicking off a numbers game for the movies hoping to land a coveted spot among the 40 or so feature films that garner nominations each year.

And while 6,124 members of the Academy of Motion Picture Arts and Sciences are eligible to vote this year, you don’t need nearly that many admirers to end up one of the chosen few.

In fact, in the Best Picture category, fewer than 600 votes will guarantee you a first-round nomination, while slightly more than 300 will get you a spot once the counting is finished.

Also read: 10 Things You Might Not Know About the Oscar Best Picture Race

The numbers are due to the Academy’s preferential method of counting votes, in which ballots are separated into stacks based on each voter’s first choice. Initially, only first-place votes count – though in most of the categories, ballots are redistributed round after round, so that second and third choices can come into play if a voter’s top pick is eliminated from contention.

Best Picture works differently, with only one round of redistribution. At that point, any film with at least five percent of the vote becomes a nominee.

Because of the preferential process and because the Academy’s branches tend to be small and select, the number of votes required for a nomination is smaller than you might expect; for instance, only five of the 24 categories, Best Picture and the four acting categories, require more than 100 votes to land a nomination.

Many others take in the 30s or 40s, though costume design only takes 19 votes from the 113-member Designers Branch, the smallest Academy branch that gives out an award.

(The new Casting Directors Branch has fewer members, only 76, but the Oscars do not have an award for casting.)

The basic rule is that you take the number of ballots cast in any category, divide by the number of nomination slots available plus one (usually 5+1=6), and round up to the next largest whole number; that’ll give you a vote count that guarantees you’ll be nominated.

Here’s the current Oscar math, based on the Academy’s branch counts for this voting year.

BEST PICTURE
If all 6,124 members of the Academy cast ballots, it would take 557 first-place votes to secure a Best Picture nomination after the initial count. But the process then uses the so-called “surplus rule” to reallocate ballots for films that had significantly more support than they needed, and it redistributes ballots of voters whose first choices receive less than 62 votes to their second (or third, or fourth…) choices.

At the end of that redistribution (again, assuming full participation), any film with more than 307 votes would be a nominee.

BEST DIRECTOR
With 269 members in the Directors Branch, the magic number for a nomination is 45 votes.

BEST ANIMATED FEATURE
There’s no magic number in this category. Nomination voting is done by volunteer members of the Animated Feature Film Award Screening Committees, a group whose membership is typically a mixture of members of the Short Films and Feature Animation Branch and all other branches of the Academy.

Members of the committees must see 65 percent of the eligible films — this year, 13 out of 20 — and must score each film on a scale of 6 to 10. The top five vote-getters, provided they average at least 7.5, receive nominations.

BEST PRODUCTION DESIGN
With a 269-member branch, the magic number is 45.

BEST DOCUMENTARY FEATURE
A first round of voting narrowed the field from 134 eligible films to a 15-film shortlist. A second round will narrow the 15 films down to five nominees. If everyone in the branch votes in this second round, the magic number is 37.

BEST DOCUMENTARY SHORT
Unlike the doc-feature category, the doc-short category still uses committees within the Documentary Branch to narrow the field to eight and then select three-to-five nominees. They use the average-score system to determine the final nominees.

BEST FILM EDITING
The branch contains 236 members, so the number is 40.

BEST FOREIGN LANGUAGE FILM
There is no specific branch governing this category; instead, volunteers from all branches of the Academy (the “general committee”) participate in a first round of voting that helps narrow the field down to nine shortlisted films.

The weekend before Oscar nominations, the shortlist will be narrowed to five nominees by 10 randomly chosen members of the general committee and 30 hand-picked Academy members in Los Angeles, New York and London, who will view all of the shortlisted films and vote.

BEST MAKEUP AND HAIRSTYLING
Members of the branch who can attend a meeting have already narrowed the field down to seven. (At least 15 voters must have attended the meeting.)

If all 135 members have seen all seven shortlisted films and opt to vote, which obviously is highly unlikely, the magic number would be 34.

BEST ORIGINAL SCORE, BEST ORIGINAL SONG
The Music Branch is made up of 244 members, so 41 of them are enough to guarantee a nomination for songs or scores.

Also read: What Does It Take to Vote for the Oscars?

BEST LIVE ACTION SHORT, BEST ANIMATED SHORT
Volunteer members of the Short Films and Feature Animation branch have selected 10-film shortlists in the two categories. Members of the branch who see all the shortlisted films are eligible to score each film on a scale of six to 10, with the top five films scoring higher than 7.5 becoming nominees.

If fewer than five films score that highly, the category can have as few as three nominees.

BEST SOUND EDITING, BEST SOUND MIXING
The 428-member Sound Branch is the second-biggest among the branches that nominate their own awards. (The Executives and Producers Branches are bigger, with 457 and 485 members, respectively, but their members only vote to nominate Best Picture.)

The magic number for the two sound awards is 72.

BEST VISUAL EFFECTS
The Visual Effects Branch’s executive committee determined a 10-film shortlist, and all members of the branch are now invited to a Jan. 10 screening of excerpts from the shortlisted films, followed by a discussion with the visual effects artists responsible. At that screening, the 10 shortlisted films will be narrowed to five nominees using preferential voting.

If every single member of the branch happened to be in town and came to the Academy for the screening, the number would be 57.

The results of all this Oscar math will be announced on Jan. 15.