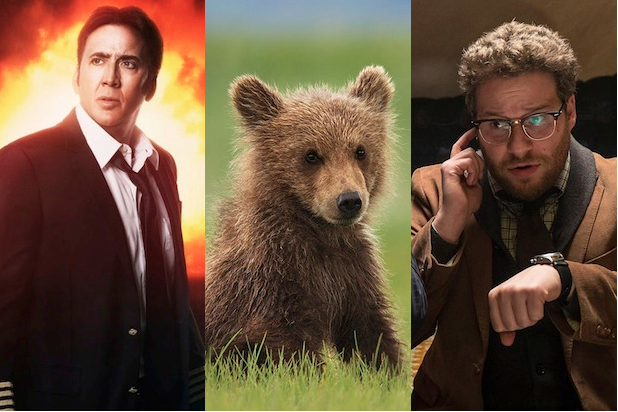 Voters for the Academy Awards can begin casting their ballots online next Monday, Dec. 29 — and those who’ve opted out of the Internet option and requested paper ballots already have those in their hands.

So as the start of voting nears, TheWrap has pored over Academy lists to offer some facts, figures and fun about the 2014 Oscar race. For starters, here are a few things you might not know unless you’ve examined the Academy’s 33-page “Reminder List of Productions Eligible for the 87th Academy Awards.”

It ranges from “About Last Night” to “Yves Saint Laurent,” from “Gone Girl” to “Jersey Boys,” from “Bad Words” to “The Good Lie,” from “The Two Faces of January” to “The November Man.”

Of the 323 films that are technically eligible for Best Picture, about 300 of them don’t really have a chance in that category, and about 250 of them are longshots in any category. But hope springs eternal in Hollywood, and contracts require Oscar submissions (and sometimes Oscar campaigns), so the paperwork gets filed and the AMPAS lists grow longer and longer.

Here’s what else you can find in the pages of this year’s Reminder List:

1. “The Interview” looked like it was going to be eligible for a day … but now it’s not. Before the Sony hack attack derailed the release of the Seth Rogen-James Franco comedy, the film did fill out the paperwork needed to qualify for the Oscars. That meant that as long as the film played for one week in a theater in Los Angeles County, it would become eligible — and Oscar voters could send a giant message to Kim Jong-un by naming it the year’s best picture.

Not that they would have, of course. But they could have.

But while the film would still have been eligible if Sony had made it available via VOD on the first day of its theatrical run, the company went further than that and put it on VOD outlets a day before it hit theaters. That move made it ineligible.

UPDATE: When this story was originally posted, it appeared that the VOD and theatrical runs would begin on the same day, and that “The Interview” would qualify for the Oscars. The next day, the studio announced and began its early VOD run. The story has been changed to reflect that new information.

But a new rule limits each film to a maximum of 10 actors and 10 actresses – which is obviously generous, since no film really has more than a 3-4 potential acting nominees.

Still, more than three dozen films maxed out on their acting submissions. The bountiful ones included “American Sniper,” “Black or White,” “Boyhood,” “Gone Girl,” “Inherent Vice,” “Selma,” “Top Five” and a number of films less likely to figure into any of the acting races. Among them are “About Last Night,” “Alexander and the Terrible Horrible, No Good, Very Bad Day,” “Blended,” “Christmas Ride,” “Godzilla,” “Jack Ryan: Shadow Recruit,” “Paranormal Activity: The Marked Ones,” “Tammy” and “Transformers: Age of Extinction.”

3. Seven films only submitted a single cast member. These included a no-brainer choice, “Locke,” which takes place inside a car with only Tom Hardy onscreen. But other films that stuck to a single performer included “Obvious Child” (Jenny Slate), “Under the Skin” (Scarlett Johansson) and the Spanish foreign-language entry “Living Is Easy With Eyes Closed” (Javier Camara).

4. Six films that weren’t documentaries didn’t submit any cast members at all. One of the films was the Oscar entry from Kyrgyzstan, “Kurmanjan Datka Queen of the Mountains.” The others were all animated indie films: “Cheatin’,” “Henry & Me,” “The Hero of Color City,” “Jack and the Cuckoo-Clock Heart” and “Miniscule – Valley of the Lost Ants.”

5. Out of 288 features that submitted cast members, 65 percent submitted more actors than actresses. Only about 19 percent had an equal number of actors and actresses, and less than 16 percent had more actresses than actors.

Even some movies named for their female characters – “Lucy,” “Still Alice,” “Mom’s Night Out” – submitted more male than female performers.

6. Only one of the three versions of “The Disappearance of Eleanor Rigby” is eligible. When The Weinstein Company bought “Eleanor Rigby” in Toronto in 2013, it was a work consisting of two films, subtitled “Him” and “Her,” each told from the perspective of a different character and designed to be viewed back-to-back. The film (or films) won acclaim there, but the company and director Ned Benson opted to make a third, condensed version, which they called “Them.” Although the combined version wasn’t as rich and nuanced as the original two-part version, it opened a month before a limited run of “Him” and “Her” — which, sadly, made “Them” the only “Eleanor Rigby” eligible for Oscars.

7. 29 documentaries were entered in the Best Picture race, which means 105 opted to compete only in the Best Documentary category. Because the documentary category has more stringent qualifying rules than Best Picture, with Los Angeles and New York runs required, any movie that qualifies for doc-feature category has already met the release requirements for Best Picture. But of the 134 docs that qualified, the vast majority opted only to compete with other non-fiction films.

“Citizenfour,” “Life Itself,” “Virunga” and more than two dozen others are eligible outside the doc category. But many others skipped the non-doc races, including shortlisted films “Last Days in Vietnam,” “The Overnighters,” “Tales of the Grim Sleeper,” “Art & Craft,” “Citizen Koch,” “The Internet’s Own Boy” and “The Kill Team.”

8. Three documentaries entered the Best Picture race, but not the Best Documentary Feature race. Two visual spectacles – Disney’s IMAX nature film “Bears” and “Koyaanisqatsi” director Godfrey Reggio’s “Visitors” – are on the list of 323 eligible features but not the list of 134 eligible docs. So is Ed Perkins’ “Garnet’s Gold,” which has two songs entered in that race and needs to be on the master list for them to be eligible.

9. 14 foreign language films are also eligible in other categories. Of the nine films that made the foreign shortlist, five of them also qualified for Best Picture: “Force Majeure,” “Ida,” “Leviathan,” “The Liberator” and “Wild Tales.”

Films that are out of the running in foreign-language but still in play in other categories include two of the most startling omissions from the shortlist, the Dardenne brothers’ “Two Days, One Night,” with Best Actress contender Marion Cotillard, and French-Canadian wunderkind director Xavier Dolan’s “Mommy,” which won the Jury Prize at Cannes.

Others still in play are “The Circle,” “Difret,” “Human Capital,” “Kurmanjan Datka Queen of the Mountains,” “Living Is Easy With Eyes Closed,” “Rocks in My Pockets” and “The Way He Looks.”

10. The worst movie of 2014 is not eligible for the Oscars. According to Rotten Tomatoes, the year’s biggest dud is “Left Behind,” the Nicolas Cage vehicle that currently sports a two percent positive rating. Mercifully, it was not entered in the Oscar Best Picture race.

Incidentally, the year’s sixth-worst film, according to Rotten Tomatoes’ critics, is “Grace of Monaco.” It’s the toniest of the stinkers – heck, it was the opening-night film in Cannes this year – but unlike, say, “The Interview,” it’s still awaiting an official U.S. release.