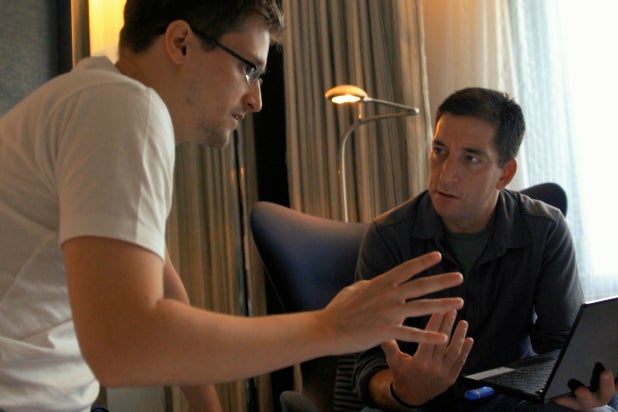 Laura Poitras’ documentary about Edward Snowden and NSA spying, “Citizenfour,” has been named the best non-fiction film of 2014 at the International Documentary Association’s IDA Documentary Awards.

The film won in a category whose other nominees were “Finding Vivian Maier,” “Point and Shoot,” “The Salt of the Earth” and “Tales of the Grim Sleeper.” All of the films except “Point and Shoot” are on the 15-film Oscar shortlist for documentary features.

In her speech, Poitras mentioned that a year ago, when she was still working on “Citizenfour” under conditions of utmost secrecy, she opted not to attend the IDA Awards despite being given the Courage Under Fire Award.

Johnny Burke and Andrew Hinton won the Best Short Film award for “Tashi and the Monk,” which also became the rare short to win the Pare Lorentz Award, given to films on environmental and social issues.

Previously announced craft awards went to the writing of “Finding Vivian Maier,” the editing of “Last Days in Vietnam,” the cinematography of “Elevator” and the music of “Alfred and Jakobine.”

Robert Redford was given the IDA’s Career Achievement Award, both for his own work on non-fiction films and his founding of the Sundance Institute and its Documentary Film Program.

In his speech, he talked about how seeing the 1964 documentary “Point of Order” had been a transforming experience in realizing the power of documentary filmmaking, and how that filmmaking could play a crucial role in revealing the truth in times like today, when “there is so much anger and … misperception and misinformation.”

The value of docs, he said, was aptly illustrated by “Snowden reaching out to Laura Poitras to tell his story.”

The Pioneer Award was given to Fenton Bailey and Randy Barbato of World of Wonder Productions, and awarded to them by Monica Lewinsky, the subject of their film “Monica in Black and White.”

The Preservation and Scholarship Award went to Cambodian director Rithy Panh, who made last year’s Oscar-nominated film “The Missing Picture” and has founded the Bophana Audiovisual Resource Center to preserve audio and video records of Cambodia, as well as offering vocational training in film and media.

Darius Clark Monroe, who documented his own journey from convicted bank robber to filmmaker in “Evolution of a Criminal,” was given the Emerging Documentary Filmmaker Award.