Is AMPAS president Tom Sherak having trouble finding the perfect person (or people) to produce the next Academy Awards show, or is a producer already on board but playing coy about announcing the news?

At the moment, the answer is hazy. We know that hiring an Oscar producer is always the first order of business for an Academy president after his election, which for Sherak came on August 18. When I asked AMPAS executive director Bruce Davis about the search on the 28th, he said Sherak was working on it every day, and that the decision “had better be well behind us in another month.” 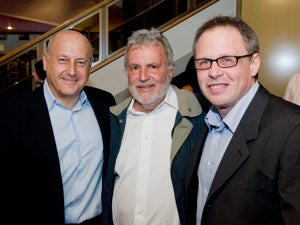 That was 27 days ago – which means that Sherak should by now have made his list of seven-to-10 candidates, consulted with the Academy administration on the order in which to make offers, and started talking to the potential producers.

“We’ll hope to hit a home run the first time,” said Davis. “Sometimes it’s an interesting problem, getting somebody of the stature you’d like. You’re asking them to take on a huge job that will start in November, and not everybody you’d like to talk into it has that kind of time.”

In the past, Oscar producers have been announced as early as August and as late as December – though in the latter case, the choice had been made much earlier, but the press release was delayed because Gil Cates, the producer, wanted to conduct his search for a host quietly, before everybody in town knew he was producing the show.

At this point, many of the usual Oscar crew members say they assume a production team is in place.   But no announcement has been made – and from what I hear, none is imminent. (That doesn’t mean it couldn’t come out of the blue tomorrow. I’m just saying that’s what I hear.)

Bill Condon and Lawrence Mark, who teamed up to produce last February’s exceptionally well-received show, definitely don’t have the time to do it again. So the search has to turn either to somebody brand new, or one of the small handful who’ve done it before. (Above, left to right: Mark, past AMPAS president Sid Ganis and Condon. Photo: Todd Wawrychuk/AMPAS)

In his “Notes on a Season” blog on The Envelope yesterday, Pete Hammond suggested what would indeed be a blockbuster choice: the team of Steven Spielberg and his longtime producer Kathleen Kennedy. She’s a six-time best-picture nominee, an AMPAS governor and the current Academy vice-president, and Hammond reports that Spielberg was keenly interested in the way the last Oscar show was produced, asking for regular updates.

In fact, Spielberg’s interest in the show goes back much further than that: years ago, Spielberg told a friend of mine that he had expected to be offered the gig as Oscar show producer, and was disappointed when it didn’t come. When booked as a presenter, he often showed up at rehearsals asking lots of questions about the sets, the structure of the show, the host’s material …

Hammond’s other suggestions include a few producer teams – Bruce Cohen and Dan Jinks of “American Beauty,” Craig Zadan and Neil Meron of “Chicago” – along with the likes of the famously combative Joel Silver and Sherak’s former Revolution Studios partner Joe Roth, who produced the show in 2005, chafed at some of the Academy’s restrictions, tried to make big changes and in the end told me that he “enjoyed it very much.”

Or they could go back to Cates, the producer of 14 Oscar shows and, in the eyes of many, the architect of a type of tradition that the Academy may want to move away from after Condon and Mark’s well-received overhaul of the Oscar format.

Curiously, though, Cates might actually be capable of making more substantive changes than most new producers. In years past, first-time producers Roth and Quincy Jones didn’t get anywhere when they suggested handing out awards in the aisles, or re-seating nominees midway through the show to get them closer to the stage; it wasn’t until comfortable old hand Cates wielded his significant clout within the Academy that those changes were actually instituted (the first of them widely panned in 2005, the second going virtually unnoticed the following year).

The gig of producing the Oscars has boosted some careers and wrecked others (Allan Carr, anyone?). Some producers, like Laura Ziskin in 2002 and 2007, found the experience stressful but invigorating; others, like Quincy Jones in 1996, were considerably less enamored with the job.

“It was nice working with you,” Jones told one staff member moments after his well-received show ended. “I’d say let’s work together again, but I’m never doing this show again as long as I live.”