Steven Spielberg was so freaked out by it that he returned it to sender in a garbage bag.

Well, at least that’s what a Paramount spokesperson says about the studio’s underground phenom, "Paranormal Activity," when it haunted the halls at DreamWorks. 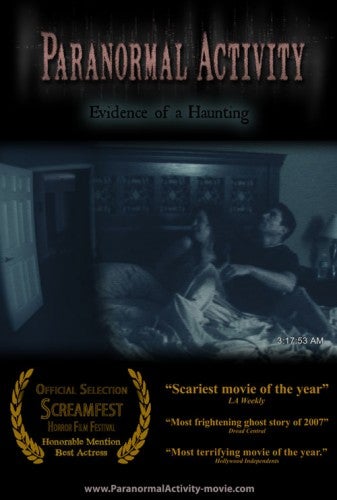 Indeed, after all the genre films that have been talked about as being the next "Blair Witch Project," this one really may be.

And the haunted-house film — made in 2006 by an Israeli videogame designer and his friends and shot on handheld cameras for less than $15,000 — isn’t even scheduled for general release.

But having kicked around the festival circuit for several years, it finally was shown last weekend at midnight screenings in 12 theaters around the country.

According to Paramount officials, the response was so strong  — 230,000 visitors to the Paranormalmovie.com website “demanded” that the movie come to their town, according to the studio — that they decided to expand its play.

So starting Thursday at midnight, Paramount will enhance the number of midnight a.m. runs to 30 cities, with the ArcLight in Los Angeles and New York’s AMC Empire slated to carry the unrated horror movie.

In fact, the studio does seem to be adhering to the model it used for last year for "Cloverfield," another docu-style horror movie compared "Blair Witch" — unfairly since the former was a $60,000 movie.

Paramount also worked in the weeks before "Cloverfield’s" $40 million opening to fan the Internet flames, building mystery for the film and never trotting the cast or filmmakers out with a formal junket.

"If you get enough interest and it catches on and really works … then (you could) put it out normally, with reviews, by Oct. 30," said Megan Colligan, Paramount’s marketing co-president, to the L.A. Times.

But regardless of whether "Paranormal Activity" will generate the same genuine grass-roots enthusiasm a “Blair Witch"  — which garnered nearly $250 million globally in 1999 on a budget of just $60,000 — its rise from DVD screener to theatrical release is nothing short of phenomenal.

Seeking to better understand all the things that are going bump in the night in their new home, the couple set up infrared cameras … with scary results.

Like “Blair Witch,” the story unfolds as viewed archival footage.

Originally, Blum and Schneider weren’t as interested in the low-budget movie as they were in its maker, Oren Peli, who is now at work on another found-footage horror movie, “Area 51.” They had wanted to get him set up with a robustly budgeted remake.

Screenings of the movie at festivals including Slamdance yielded no buyers but plenty of believers. Among them were DreamWorks production exec Ashley Brooks … who convinced her boss, studio production chief Adam Goodman … who, in turn convinced his boss, studio chief Stacey Snider.

Spielberg saw it next, reportedly freaked out, and Peli had a remake deal.

As legend — retold to TheWrap by Paramount marketing officials — has it, Goodman was showing the original version to writers to get ideas for the remake, only to have some of the scribes walk out of the room because, they later said, they were too scared.

DreamWorks officials then began wondering whether the remake was even necessary.

Why not just release the original?

By this time, however, the relationship between DreamWorks and Paramount, which bought the studio in 2005 and distributed its films, began to sour, and the film — along with the numerous other DreamWorks releases – was put on the shelf… until Goodman assumed Paramount’s top production job in June.

Then came a rainy outdoor screening at Telluride on Labor Day that captured the fascination of critics and bloggers.

Now the question is, What will be the marketing strategy for translating Internet buzz into actual movie phenomenon? Paramount and the film’s producers don’t want to jinx anything by saying too much.

“The plan is still being formulated,” said a spokeswoman for Paramount’s theatrical unit. “It remains to be seen how this is all going to work. We’re just dipping out toe in right now.”

Likewise, Blum, seems to crossing his fingers, too. “The way fans have embraced the movie so far is hugely encouraging,” he told TheWrap, “but it’s really too early to say anything beyond placing the destiny of the film directly in the hands of the audience.”