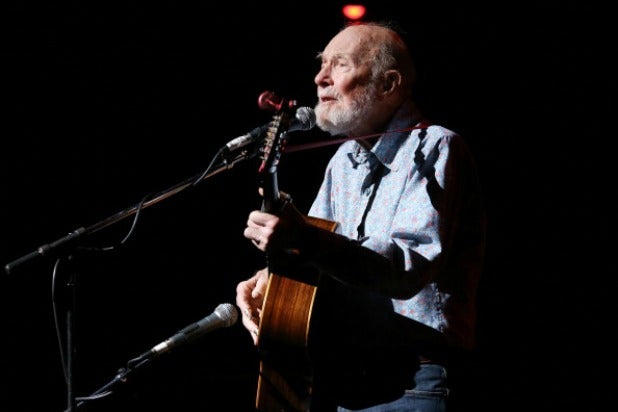 Pete Seeger, whose storied career in folk music took him from a Communist blacklist to singing at President Obama’s first inauguration, has died. He was 94.

His death was confirmed by his grandson, Kitama Cahill Jackson, who told the New York Times he died of natural causes at New York-Presbyterian Hospital.

Seeger used folk music as an instrument of peaceful social change. According to the Times, it was his adaptation of “We Shall Overcome,” based on old spirituals, that became the defining anthem of the Civil Rights Era.

He was called before the the House Un-American Activities Committee because of his 1940s membership in the Communist Party in the 1940s, and offered to sing songs instead of answering questions about his past affiliations. In response, he was held in contempt.

But Seeger overcame. He helped lead the folk revival of the 1950s and ’60s (recently fictionalized in “Inside Llewyn Davis”), became a fixture in the anti-war movement, and inspired artists including Bob Dylan and Bruce Springsteen. He performed alongside Springsteen and his own grandson at President Obama’s 2008 inauguration.

Seeger became famous in the band The Weavers, singing hits including a cover of Lead Belly’s “Goodnight, Irene” and “If I Had a Hammer,” which he co-wrote with Lee Hays. In 1965, the Byrds had a hit with “Turn! Turn! Turn!” his adaptation of a passage from the Book of Ecclesiastes. It became another peace anthem.

His commitment to musical activism never flagged: In 2011, he joined Occupy Wall Street protesters to sing “We Shall Overcome.” Earlier this year, he led a Farm Aid audience in a performance of “This Land Is Your Land,” joined by John Mellencamp, Willie Nelson, Dave Matthews and Neil Young.

Watch Seeger perform “This Land Is Your Land” at the 2008 inauguration, leading a sing-along, as always: