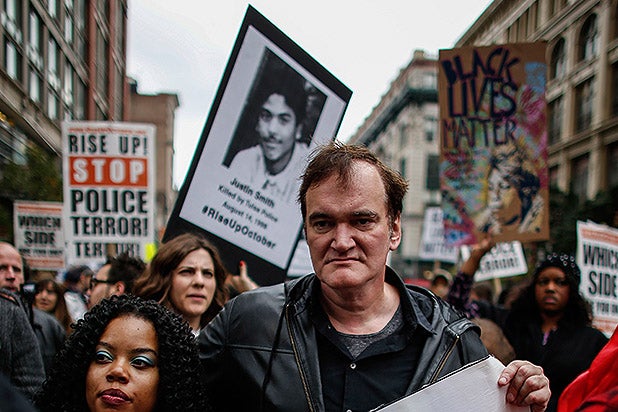 Quentin Tarantino‘s “The Hateful Eight” premieres Monday night in Hollywood, and the director knows that he might be facing more than just screaming fans when he arrives at the Cinerama Dome.

That’s because several police unions have called for a boycott of the film after Tarantino appeared at an anti-police brutality rally in New York City in October and said, among other things, “I have to call a murder a murder and I have to call the murderers the murderers.”

But the Oscar-winning writer and director insists he is unfazed by the boycott threats.

“It doesn’t concern me that much commercially,” Tarantino told TheWrap in an interview over the weekend.

As the controversy over his comments exploded, Patrick Lynch, president of New York’s police union, called the director a “cop-hater” and touched off the calls for a boycott. Several other law enforcement groups joined Lynch’s rallying cry, including the National Fraternal Order of Police, whose director Jim Pasco, promised a “surprise” for the director.

“They say they’ve got a surprise waiting for me, and I’m kind of curious what that is. I can’t imagine it being anything other than them trying to embarrass me, like picketing the premiere or something like that.

“That could happen, and they have the right to do that if they want.”

But Tarantino, whose new film is a Western set a few years after the Civil War, with racism a clear theme, said he is worried about certain aspects of the police response.

“What concerns me is the way that the mouthpieces for the police unions have misrepresented what I said, and I think actually slandered me, calling me a cop hater,” he said.

“What actually concerns me more than anything else is the fact that I know I had a lot of policemen who are fans of my work. And I like to think that they won’t follow the boycott, they won’t just take Patrick Lynch’s words for what I said – that they’ll listen to what I said, and hear how I’ve clarified my comments as time has gone on.”

Since his initial comments at the rally, Tarantino has insisted that he was not condemning all police, but was making a point about specific recent cases of unarmed civilians being killed by police.

“They might think I’m an out-of-touch celebrity who doesn’t know what the fuck he’s talking about, but I’m not coming from a place of hatred,” he told TheWrap. “And I think I am dealing with a reality that’s on the ground, and a reality that I would hope that they would agree with: that this stuff is sickening and it needs to stop.