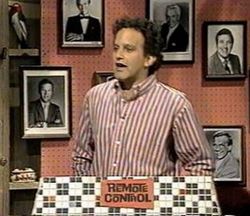 Ober’s reps confirm that he died over the weekend at the age of 52. The cause of death was not immediately known.

Lee Kernis, a manager at Brillstein Entertainment Partners who represented Ober for more than 20 years, told the New York Times that Ober was found dead on Sunday. He said Ober had last been heard from on Saturday night, when he spoke to a friend and complained of a headache and flu-like symptoms.

Ober’s career began in the mid-1980s with a turn on talent competition "Star Search."

Starting in 1987, he hosted five seasons of "Remote Control," which was part of the first group of TV series created by MTV. The quiz show tested contestants’ pop-culture knowledge on a set that looked like an overgrown frat boy’s basement.

Ober would ask questions about celebrities, movies, TV shows and music videos of the contestants, who sat on recliners with food and drinks on trays in front of them.

Ober went on to host other game shows, including "Smush" and "Make Me Laugh."

He also co-hosted a talk show on Los Angeles radio station KLSX 97.1, "Ober and Olsen," with Susan Olsen, best known as Cindy Brady on the original "The Brady Bunch."

Here is a clip from "Remote Control’s" debut episode.